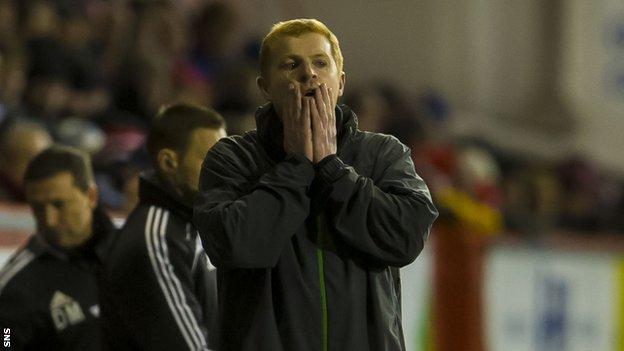 Virgil van Dijk was dismissed in the 13th minute for a challenge on Peter Pawlett, then a penalty claim was denied by Thomson in the second half.

"I think we've been done by the ref," said Lennon. I don't think it's a sending off.

"Then there was a clear handball in the second half that everyone could see, even the referee saw. It's ridiculous."

The defeat brought a halt to Celtic's unbeaten domestic run, which had extended to 29 top-flight matches stretching back to last season, and ended goalkeeper Fraser Forster's record-breaking run of clean-sheets.

I'm not going to do it with the referee tonight, but we've been done by two crucial decisions which could have swayed the game either way

Lennon was incensed at Thomson's decision to send off Van Dijk, but praised his players for their resolve in the second half to reduce the deficit and give Aberdeen a nervous finale after the Dons had led by two.

"I think the sending off had a huge bearing and influence on the game," said Lennon.

"It's so early in the game. I've seen it maybe two or three times now, and I'm still adamant that it's not a red card.

"I'd need to see the handball again to know what a handball is.

"I'm not going to do it with the referee tonight, but we've been done by two crucial decisions which could have swayed the game either way.

"We were brilliant. In the second half, we were camped in Aberdeen's half, but unfortunately we couldn't get the second goal which we thoroughly deserved."

Goals from Jonnny Hayes and Adam Rooney gave Lennon's side an uphill struggle but the defending champions were rewarded for their second-half endeavours through James Forrest's strike.

"The first goal, sometimes you've got to hold your hands up and say 'fantastic hit'," said Lennon.

"It's going to take something special to beat Fraser, and that was from Jonny Hayes.

"I was disappointed with the second goal, but in the second half I couldn't fault the players - they were magnificent and deserved something from it.

"We've been in that position before - you just shift things around a little bit.

"For me, it didn't make that much of a difference. We were still passing the ball well and creating chances.