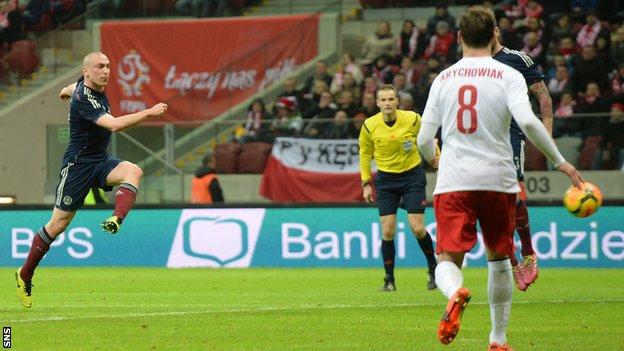 The hosts had created the better chances with Ludovic Obraniak and Arkadiusz Milik denied by David Marshall in the first half.

And Brown compounded the home side's frustration when he lashed a loose ball past Wojciech Szczesny from 19 yards.

The midfielder had scored from a similar range against Norway in November and, as on that occasion, one goal proved to be enough for the Scots.

Poland and Scotland will meet again in the upcoming Euro 2016 qualifying campaign and .

With Darren Fletcher named as a substitute, Brown continued with the armband and made an important interception deep in his own half early on.

Obraniak had the game's first effort, his long-range curler looping towards goal and drawing a save from Marshall.

The Cardiff keeper made another fine stop when Milik fired in a dipping shot that bounced awkwardly in front of goal.

Poland were in the ascendancy, but the visitors created arguably the best opening of the first half shortly after Slawomir Peszko and Brown had been booked for an altercation in midfield.

Right-back Alan Hutton burst into the six-yard box only to have his driven cross cut out by Szczesny as Ikechi Anya and Steven Fletcher waited in the middle.

Darren Fletcher replaced James Morrison at the break, the Manchester United midfielder ending a 16-month absence from international football through illness, while Steven Naismith came on for Steven Fletcher.

The home side remained keen on shooting from outside the box, but neither Peszko nor Obraniak could trouble Marshall in the opening minutes of the second period.

Scotland threatened when Naismith cut back for Ross McCormack on the edge of the box, but the Leeds forward's tame effort was blocked by Lukasz Piszcek.

Glik should have headed the Poles ahead from Obraniak's teasing free-kick delivery but instead nodded wide.

Milik was similarly frustrated when he latched on to a hoisted pass only to lift his shot over.

The next phase of substitutions afforded a Scotland debut to Dundee United's Andrew Robertson, the 19-year-old left-back who was playing in the lowest tier of senior Scottish football with Queen's Park a year ago.

Robertson was soon celebrating with his new team-mates as the Scots took the lead.

Charlie Mulgrew's header from Anya's cross was cleared to the hovering Brown, who blasted in a left-foot shot with Szczesny rooted to the spot.

Poland were stunned and pressed hard in the closing stages without carving out any clear openings.

Eugen Polanski did muster a shot on target in stoppage time, but Marshall was once again well placed to block.