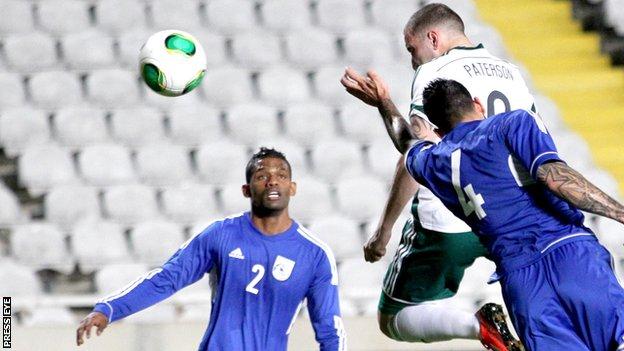 Northern Ireland's goal drought in away friendlies now stretches to 10 games after their stalemate against Cyprus.

Jamie Ward fired wide in the second half before Gareth McAuley was shown a straight red card for a last-man challenge on Christofi on 76 minutes.

Roy Carroll saved a late Andreas Makris shot as the visitors held on.

The portents for the game were not good - a Northern Ireland side without a goal in an away friendly since 2006 against the Cypriots, who had drawn a blank in their last six competitive matches.

The visitors made a bright start in front of a paltry crowd at the GSP Stadium and Paterson came close to scoring after 13 minutes.

Niall McGinn sent in an inviting cross and the Huddersfield striker saw his powerful six-yard header saved by the alert Georgallides.

The balance of power shifted towards Cyprus as the half progressed and the hosts were unfortunate not to go in ahead at the break.

Mitidis drilled wide from eight yards from a low cross before Christofi's volley was palmed over by Mannus after the Sion striker beat the offside trap.

Mannus made another good save from a deflected cross as a disappointing 45 minutes for Northern Ireland came to an end.

The Cypriot threat abated in a more even second half and Ward dragged his shot wide from McGinn's clever throughball.

Christofi blazed over from 18 yards before his low shot was easily saved by Carroll.

Northern Ireland played the last 14 minutes with 10 men after McAuley was sent off for chopping down Christofi as the forward raced clear on goal.

Cyprus debutant Makris was presented with a chance to win it in the final minute, but Carroll raced out to smother the substitute's shot.