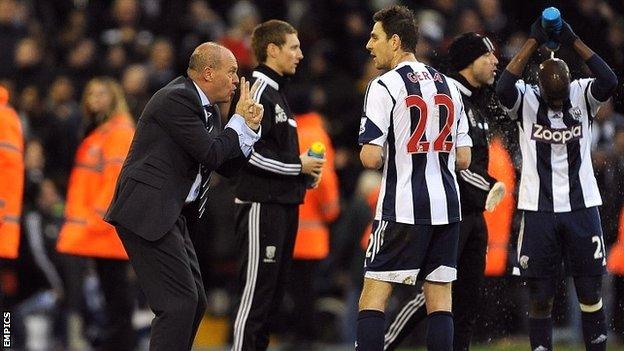 West Brom boss Pepe Mel is fighting for his future after six games in charge.

The Spaniard was appointed on 9 January but the Baggies are yet to win under him and are just a point above the Premier League relegation zone.

Senior players have expressed their concerns to Mel after struggling to adapt to the 50-year-old's preference for a high-tempo pressing game.

Chairman Jeremy Peace would not balk at taking action if the club's top-flight status had to be safeguarded.

The Baggies' next game is against Manchester United at The Hawthorns, a week on Saturday.

Mel's side were due to face fellow strugglers Sunderland this weekend, but the Black Cats are in the Capital One Cup final.

West Brom have won just four Premier League games this season and have drawn 13 times, the highest in the top flight.

Though Mel is popular with senior players, it is understood their preference is to adopt West Brom's usual counter-attacking style, which helped them finish eighth last season and 10th the previous term.

Former Real Betis manager Mel signed an 18-month contract to replace Steve Clarke, but it is significant the recent appointment of David Gomez as his right-hand man is only until the end of the season.

Behind the scenes, the club are still trying to manage the loss of sporting director Dan Ashworth, who joined the Football Association last year.

His replacement, Richard Garlick, is inexperienced in the role and director of technical performance and scouting David McDonough is becoming increasingly influential.

McDonough is fluent in Spanish and is spending more time at the training ground, trying to help Mel get his message across to the players.

He was a key figure in recruiting the head coach and the feeling is he now has more influence than Garlick on Peace.

The Baggies are also considering overhauling their scouting network as the system honed by Ashworth has failed to secure impressive returns in the past two transfer windows.