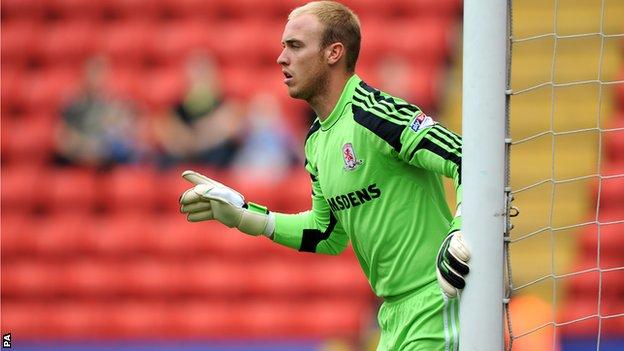 Middlesbrough goalkeeper Jason Steele says it is "great to be fit again" after three months out injured.

The 23-year-old limped off in but had an injection to settle damage to an ankle tendon.

Further investigation following defeat showed he needed surgery as both the tendon, and surrounding ligaments, had ruptured.

"It's been very hard to sit and watch, especially with a nasty injury that needed operating on," he told BBC Tees.

"I don't like watching and have avoided going to some games as I get too nervous. It's great to be fit again."

Steele, who has been capped by England at Under-21 level and was included in the Team GB 2012 Olympic squad, was an ever-present for Boro in the Championship last season.

He has been first-choice keeper at the Riverside since making his debut in 2010, and racked up 141 appearances for the club.

During his time on the sidelines, played all 16 league matches. but the 37-year-old former Republic of Ireland stopper

"I certainly haven't got off to the best of starts under the new gaffer - he's barely even seen me train," Steele explained.

"It's been a shame that I've only been able to spend two weeks with Shay as well. He's one of my boyhood idols and I value the little bits of advice I got from him."

In anticipation of Given's departure, Karanka on loan for the rest of the season and the Teessiders also have experienced Greek Dimi Konstantopoulos in the first-team squad.

"There's some great competition between the keepers that previously we've never had whilst I've been here," Steele added.

"I cannot wait to start playing again. I feel I'm 100% ready for the Sheffield Wednesday game at the weekend."