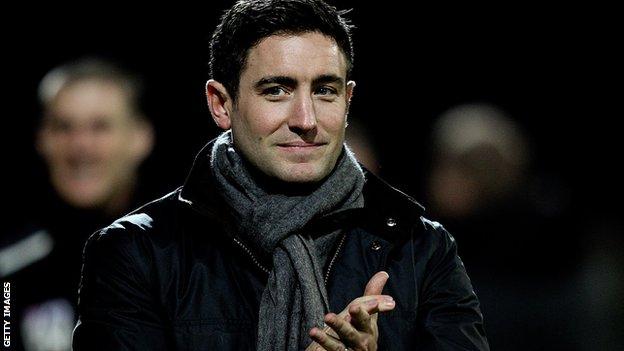 Manager Lee Johnson is confident that Oldham Athletic will not be dragged into a League One relegation battle.

Johnson's side are 15th in the table and five points above the drop zone after a 2-1 home defeat by MK Dons.

Victory on Tuesday would have taken the Latics into the top half of the table.

When asked if he thought his side could pick up enough points from their remaining 13 matches, he told BBC Radio Manchester: "I certainly believe we've got enough quality."

Johnson continued: "It's in our hands and that's what you want. It's disappointing because we could have kicked on, got away from it and started looking towards the top half.

"As it goes, it was a poor day for us. But we're Oldham and we'll bounce back."

One of Oldham's main problems has been a lack of consistency - the Latics have won back-to-back league games only once this term.

"For some reason, the players tend to just relax a little bit after a good win," added the 32-year-old. "That's when you've got to go harder."