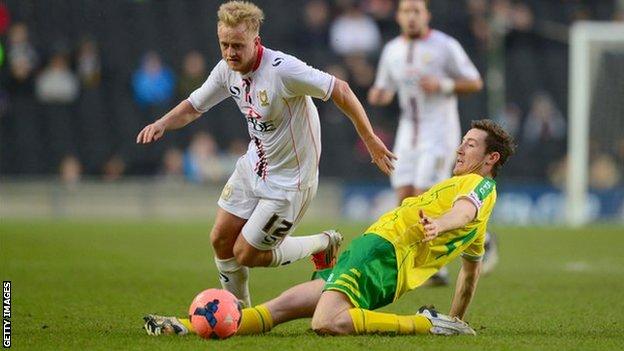 Uncapped Milton Keynes Dons midfielder Ben Reeves has been named in the Northern Ireland squad to face Cyprus in a friendly in Nicosia on 5 March.

The 22-year-old former Southampton player is the only new face in manager Michael O'Neill's squad.

Defender Baird has been out since November with an ankle injury, having signed a short-term deal with Reading, which expired in January.

Shiels has shown good form for Rangers in recent weeks while Palermo frontman Lafferty returns after serving a suspension and missing the friendly against Turkey in November because his wife was about to give birth.

Reeves qualifies for Northern Ireland because his grandparents hail from Fermanagh.

"We have a few missing so we have a chance to bring in some players who haven't been involved in recent times," said O'Neill.

"Ben is a young player who is rebuilding his career at MK Dons after being released by Southampton.

"He's had a good season and has scored 10 goals. It's important to the chance to integrate him and give us more resources to pick from."

O'Neill will use next week's match as preparation for the Euro 2016 qualifiers, which begin with a trip to face Hungary on 7 September.

The squad will play further friendlies against Uruguay, in Montevideo on 30 May, and Chile, in Valparaiso on 4 June.