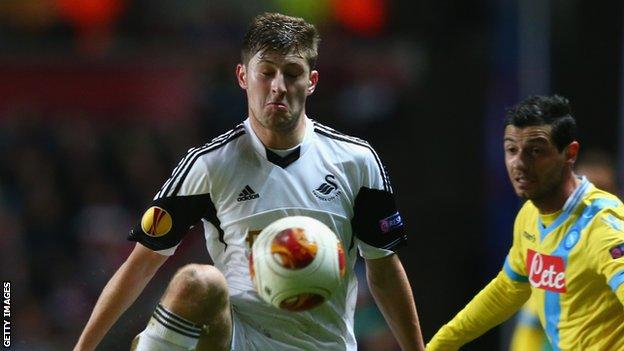 Swansea City defender Ben Davies says the club is confident of getting past Serie A side Napoli in the Europa League last 32 on Thursday.

Premier League Swansea impressed as they held Rafael Benitez's side to a 0-0 draw at the Liberty Stadium in the first leg.

Away goals count so a score draw at the Stadio San Paolo in Naples could see the Swans through to the last 16.

"We've got every chance of going through," said Davies.

"We know it's going to be tough but there's no reason why we can't turn them over.

"We are going there with no pressure, we are still underdogs."

If Swansea do get through they will face either Porto or Eintracht Frankfurt who are tied at 2-2 following their last-32 first leg.

But Napoli have already beaten British opposition at home this season overcoming Arsenal 2-0 at the Stadio San Paolo in the group stages of the Champions League.

The Swans will be hoping top scorer Wilfried Bony, who scored two in their 4-3 defeat at Liverpool on the weekend, can continue his good form in front of goal.

Bony has scored nine goals in his last 11 and Davies says scoring first could be key on Thursday.

"If we can get something early it will be a massive boost for us," said Davies.

"We are just going to try and play our game and go for it.

"If we do that then we can come away from it going through to the next round."