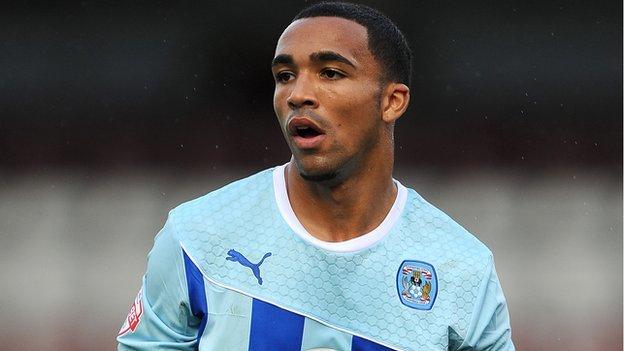 Coventry City striker Callum Wilson says he is ready to return after two months out with a shoulder injury.

The 21-year old Sky Blues youth product feared that he might not play again this season after undergoing surgery on a dislocated shoulder following the 3-1 New Year's Day win at Rotherham.

But he successfully completed 45 minutes for Coventry's Under-21s in a 2-2 draw with Sheffield Wednesday.

"I feel ready. I've been in full training for a week now," he said.

"To come through the test without any further injury and feeling good, is great.

"Match fitness isn't just about your fitness but about your sharpness on the pitch and I'm probably not as sharp as I was before the injury - but that will come with game-time.

"I'm doing extra training to get that sharpness back and I'm sure I can continue the form I had before the injury."

Wilson's injury came at a bad time for Pressley, who had only just been stunned by a transfer request from top scorer Leon Clarke, who eventually departed for Wolves at the end of January.

Coventry initially masked the loss of Clarke but Pressley admits that the postponements of home games against Walsall and Bradford City may yet work to their advantage.

"It's good for him, the more games are cancelled, the less he misses," said Pressley.

"He's delighted with that. It's just a question of getting that contact and sharpness back."

After beginning the season on -10 points, the Sky Blues have slipped 15 points adrift of the League One play-off places, and now stand only five points clear of the relegation zone, in 14th.