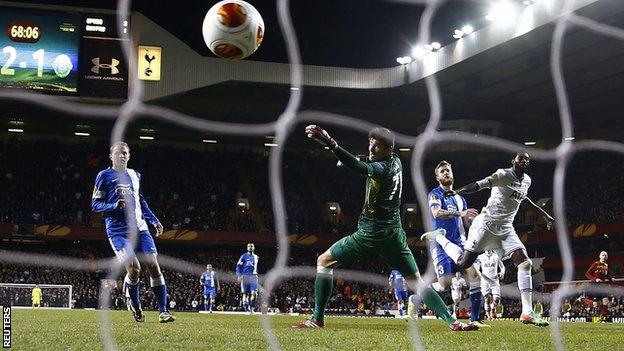 Trailing 1-0 from the first leg, Spurs' task became tougher when Dnipro's Roman Zozulya headed in an away goal.

Spurs striker Emmanuel Adebayor, frozen out by previous boss Andre Villas-Boas, has netted 11 goals in 15 matches since he was recalled by Tim Sherwood.

But, after Zozulya was sent off for a headbutt, Emmanuel Adebayor's two close-range finishes saw Spurs advance.

However, with almost an hour gone of the second leg at White Hart Lane, Tim Sherwood's side looked set to become the latest Premier League team to suffer in European competition.

None of their English top-flight rivals won their Champions League last 16 first legs, while Swansea were eliminated from the Europa League earlier on Thursday.

Spurs appeared on course to continue the negative trend - until their fortunes dramatically changed in a manic second-half spell. Tottenham scored all three goals inside 13 minutes, with Zozulya's moment of madness sandwiched between.

Inexplicably, the Ukraine forward headbutted Spurs defender Jan Vertonghen, after a number of previous confrontations between the pair, as Dnipro defended a home free-kick while leading 2-1 in the tie.

Zozulya was instantly dismissed by referee Antony Gautier in the middle of a furious exchange between both sets of players in the Dnipro penalty area.

Jermain Defoe missed the opportunity to make a farewell appearance for Tottenham against Dnipro because of a hamstring injury.

But the England striker, who joins Canadian MLS side Toronto on Friday, waved a fond farewell to Spurs fans during an emotional half-time appearance at White Hart Lane.

More importantly, it stoked up the Spurs crowd and swung the momentum in their team's favour.

They instantly took advantage of the numerical advantage as Eriksen whipped in a dangerous cross from the left which allowed Adebayor to poke in.

Four minutes later, the Togo striker put Spurs ahead in the tie for the first time by controlling Zeki Fryers' long ball on his chest and calmly stroking past Dnipro goalkeeper Denys Boyko.

The manner in which Spurs celebrated, with a jubilant Sherwood fist-pumping the air as he raced down the touchline, showed the relief that had been lifted inside White Hart Lane.

All the drama came after a frustrating first half, when Tottenham dominated possession without testing the Dnipro keeper.

Sherwood's side went into the match on the back of two successive defeats following their loss in Ukraine and a disappointing reverse at Premier League strugglers Norwich on Sunday.

Ahead of kick-off, Sherwood insisted his team were not going to "crawl into a corner and hide" and backed them to start positively.

True to their manager's word, Spurs made a high-tempo start as they attempted to make an early breakthrough, pinning back the visitors in their own half.

But their failure to score early, against a Dnipro side content to play with 10 men behind the ball before breaking at pace on the counter attack, created a tense atmosphere.

Even after the home team's comeback, the Ukrainians knew that a second away goal would see them progress.

They almost stunned Spurs when Yevhen Konoplyanka, who was a January transfer target for Liverpool, forced alert Spurs keeper Hugo Lloris into a crucial injury-time save.

But the hosts held on to deny Dnipro's ex-Spurs boss Juande Ramos on his return to his former club.