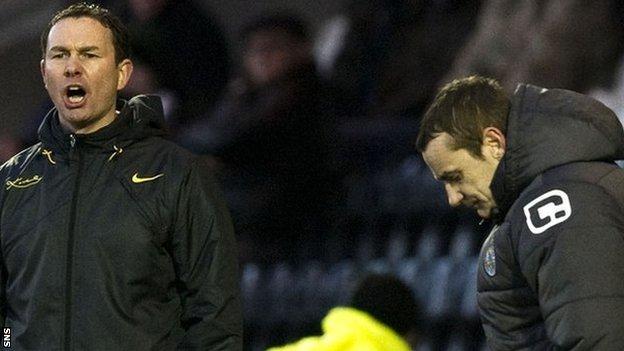 Ross County manager Derek Adams and St Mirren counterpart Danny Lennon are to face a disciplinary hearing after their touchline row on Saturday.

The pair have been issued with a notice of complaint by Scottish FA compliance officer Vincent Lunny.

They are accused of adopting "a threatening and aggressive attitude towards an opposing member of team staff" during County's 2-1 victory.

Lennon is also accused of repeated use of offensive and insulting language.

The pair, who were both sent to the stand during the match by referee Willie Collum, have until 5 March to respond ahead of the 13 March hearing.

Adams said after the game that he had been angered by challenges made on his players by St Mirren captain Jim Goodwin.

Lennon refused to comment about the altercation with his fellow manager.

However, it is believed that midfielder Goodwin will not face any action following incidents during the match against County.

Goodwin appeared to strike County midfielder Filip Kiss with his forearm before a clash of heads involving the St Mirren man sparked the altercation between Lennon and Adams, who had previously been critical of the Buddies captain.