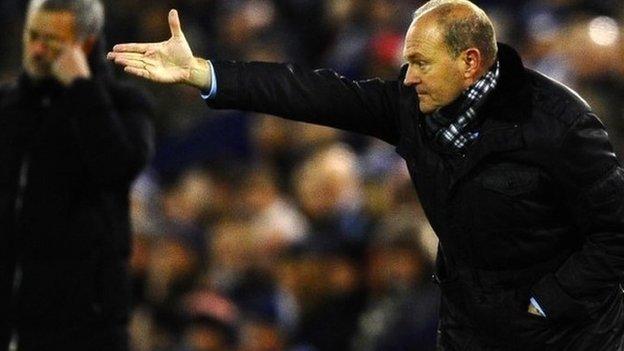 Mel, 50, has not won in six games since taking charge, prompting speculation his job could be under threat.

The statement from West Brom doesn't really address any key issues, other than confirm indirectly that Pepe Mel will be in charge for the home match against Manchester United a week on Saturday.

We're told that Mel and the football department are doing "everything in their power" to stay in the Premier League. It would be a major news story if that wasn't the case.

No assurances are given about Mel's future, but the admission there has been "a lot of soul searching" only hints that reservations senior players have had about Mel's style of play have been accurately represented in the media.

Have the players been told just to get on with it and do what Mel wants? We don't know.

It just feels like a chairman/owner keeping his options open for a while longer - and Jeremy Peace wasn't even quoted in the statement.

These are surprising times at a club until recently lauded for its stability and good governance.

Senior players have raised concerns over his style of play as the Baggies fight to stay in the Premier League.

Sporting director Richard Garlick said Mel and players would "do everything in their power to achieve this goal".

He described the West Midlands club's current situation as "a period of transition, which is natural following the appointment of a new head coach" and acknowledged there was "a lot of frustration at our league position and run of form".

West Brom have drawn four games and lost two under Mel, a run that has left them one point above the relegation zone.

That said, three of those home draws came against Everton, Liverpool and Chelsea - teams either fighting for the title or a place in the Champions League next season.

And in all three games, the Baggies were trailing before fighting back to earn a point.

While Mel is reportedly popular with senior players, it is understood their preference is to adopt West Brom's usual counter-attacking style, which helped them finish eighth last season and 10th the previous term.

In a statement issued on Wednesday, Garlick said: "Various meetings have been held within the football department over the past few days to discuss our current situation and what needs to be done to improve results in our final 11 games.

"The discussions have proved constructive. There has been a lot of soul searching and it is clear everyone has a real hunger and desire to keep the club in the Premier League.

"Pepe, the coaching staff and players will now do everything in their power to achieve this common goal."