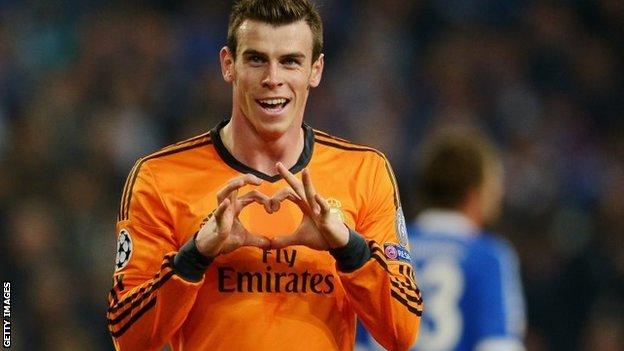 World-record signing Gareth Bale's performance in the 6-1 win over Schalke was his best yet for Real Madrid, according to manager Carlo Ancelotti.

Bale scored twice as his side closed in on the Champions League quarter-finals with an emphatic win in Gelsenkirchen.

"That was Bale's best game of the season," said Ancelotti.

The Welshman has scored 14 goals in 23 appearances for the Spanish giants since his £85.3m move from Tottenham in September.

Despite that healthy scoring rate, Bale's first-team place has come under pressure through a series of injuries and the progress of local youngster Jese.

But, after his pre-season preparations had been disrupted by his move to the Spanish capital, the 24-year-old appears to be close to the form that secured him the Professional Footballers' Association's and Football Writers' player of the year awards in his final season in the Premier League.

During his time in England, Bale had only one Champions League campaign - reaching the quarter-finals with Spurs in 2011 where they lost 5-0 on aggregate to Real.

"My players played with togetherness and they played well," he added

"Everything came off for us. The front three all scored twice but they also had the help of their team-mates."

Real play the second leg at the Bernabeu on Tuesday, 18 March and are all but certain to be in the draw for the last eight three days later.