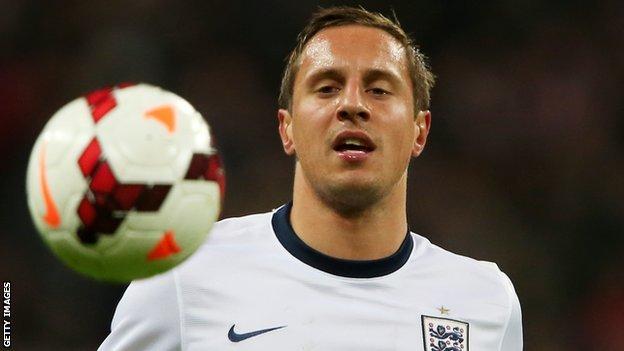 Everton defender Phil Jagielka has been ruled out of England's friendly against Denmark on 5 March with a hamstring injury.

Everton boss Roberto Martinez said of the 31-year-old: "Phil felt his hamstring and will be missing at the weekend [v West Ham] and for England."

England boss Roy Hodgson will name an enlarged squad of about 30 players later on Thursday.

"There is no doubt Roy Hodgson will have his eyes on some of the younger players so it will be particularly interesting to see what squad he names.

"Ashley Cole seems to have gone off the scene at Chelsea and if you are not playing regularly at club level, playing at international level can be difficult. He does have serious competition for that place.

"I think four or five places are still up for grabs for the World Cup. Players are not in form, particularly at Manchester United. That does not help."

Barry, 33, has been impressive in the Toffees midfield this season while on loan from Manchester City, but despite winning 53 England caps he has not played for his country since May 2012.

Martinez said: "I think Barry is ready to help England. The experience he brings is quite unique. It would be a great honour if he got a recall."

Wednesday's game at Wembley is the final chance for Hodgson to see his players in action before he names his squad for the World Cup in Brazil.

The England manager says he will try to strike the right balance between youth and experience as he prepares for the tournament, which starts for Hodgson's team against Italy on 14 June.

Speaking after the recent Euro 2016 draw, Hodgson said: "We can't just throw every senior player aside because maybe in 2016 there will be even more youngsters coming through.

"But we always want to make certain that we do select some young players."

The 66-year-old added: "Even though the focus is on Denmark we also want to introduce some ideas to the players that we have with regard to going to Brazil, about how we are going to do things logistically."