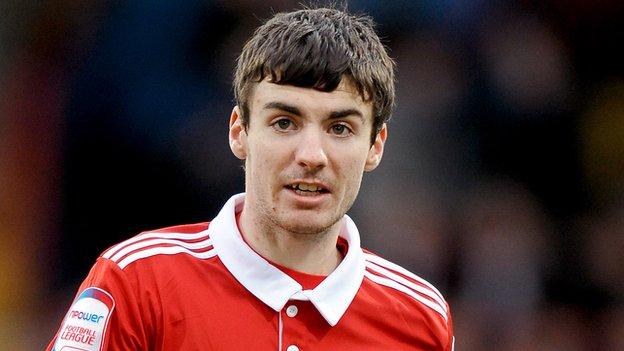 Crewe Alexandra have signed Scotland Under-21 winger Cameron Park on a one-month loan from Middlesbrough.

Park, 21, who had a previous spell on loan in the Championship with Barnsley cut short by illness two seasons ago, is in contention to play in Saturday's home game against Swindon Town.

His arrival comes in the wake of Crewe having seven injured outfield players.

Without eight of his first-team squad for Tuesday night's 1-0 defeat at Stevenage, Davis was only able to name five out of the permitted seven substitutes on the bench.

Youngster Liam Nolan made only his second start of the season, while fellow midfielder Anthony Grant played through the pain barrier, after picking up a knock in Saturday's 3-1 win at Port Vale.

On-loan Watford youngster Uche Ikpeazu and fellow striker AJ Leitch-Smith are both improving after ankle injuries, while defenders George Ray (ankle) and Ollie Turton (knee) are close to a return.

But midfielders Abdul Osman and George Evans are both unlikely to be fit after foot injuries, while it is still too soon for long-term absentees Ryan Colclough (hernia) and Max Clayton (ankle).

And Davis, who still has a slight concern over loan keeper Neil Etheridge's thigh injury, admits that he is likely to be active again in the market before this season's loan deadline on 27 March.