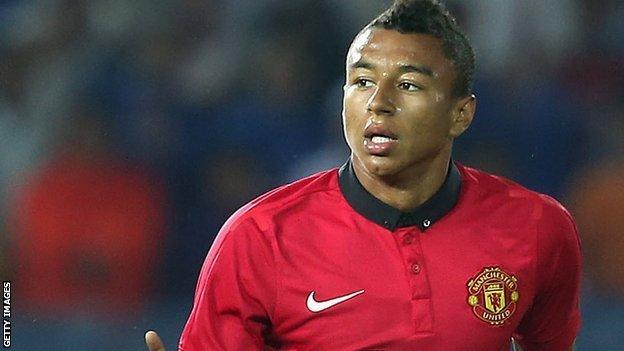 Brighton have agreed the signing of Manchester United striker Jesse Lingard on loan for the rest of the season.

The 21-year-old is yet to make his United debut, but scored six goals in 13 appearances during a loan spell with Birmingham City earlier this season.

England Under-21 international Lingard will be eligible for Saturday's trip to Millwall and for the Championship play-offs if Albion are involved.

He also spent time on loan at another Championship side Leicester City.

And Birmingham made an unsuccessful attempt to re-sign him during the January transfer window.

"He is one of the most exciting young English strikers and has already created a lot of interest following his successful loan spell at Birmingham," Brighton boss Oscar Garcia told the Sussex club's website.

"We worked hard to secure a talent who has already shown he can play at Championship level and I am very pleased to have added Jesse to our striking options for the rest of the season.

"He has an excellent pedigree, having come through the academy at Old Trafford, and there is no doubt that he has a lot of talent and ability. I am really looking forward to working with him."