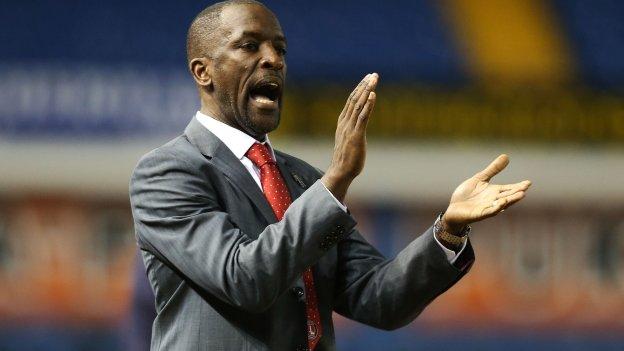 Ter Horst, 18, was recently invited for a trial with the Addicks and featured for their development side.

"We're looking and seeing how he is with us," Powell told BBC Radio Kent.

"He's looked OK but I can't really comment on where we're going to go with it at this present time, but he's training and doing OK."

Powell's immediate priority is to steer his team away from the Championship relegation zone.

Charlton are in the bottom three but beat promotion chasers QPR and then reached the quarter-finals of the FA Cup with a victory at Sheffield Wednesday.

It means they are in good spirits for a daunting trip to face Powell's former club Leicester, who are eight points clear at the top of the table.

"Our season looks a lot brighter. Now a lot of hard work lies ahead, let's make no bones about that," said Powell.

"We haven't done anything at all. We've got two terrific results which have picked up everyone, but we've got to go to Leicester - in good heart, which helps - and it's quite a tall order.

"We know our season has taken an upward curve, especially in the FA Cup, but it's only one result we've got in the league."