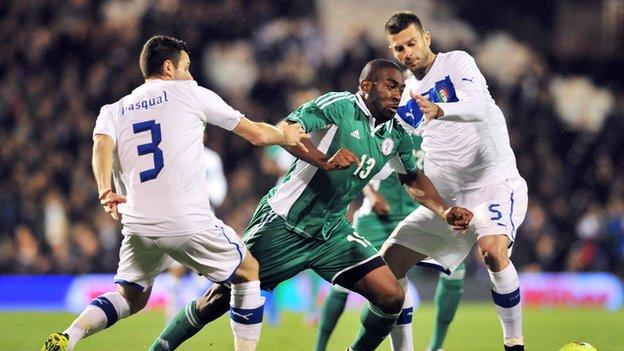 Toronto striker Bright Dike has been ruled out of Nigeria's World Cup squad after surgery on an Achilles injury.

Dike tore his Achilles tendon for the second time in three years during a training session two weeks ago.

Nigeria coach Stephen Keshi said of the 27-year-old: "I felt terribly bad for him when I first heard; unfortunately injury is part of football.

"Luckily he has had a successful surgery, but will miss the World Cup he worked extremely hard to be a part of."

Keshi described the injury to Dike as "more than harsh" and bemoaned the absence of his dedicated striker.

"After battling hard to recover from previous injury setbacks, this latest one is more than harsh for a player as dedicated as Bright Dike.

"We can only wish him speedy recovery.

"Missing the World Cup in Brazil is not the end of his Super Eagles career because we will give him a chance to return when he's fully recovered."

Meanwhile, Keshi says he is happy with the Nigeria Football Federation (NFF) for their determination to secure top friendlies for the African champions ahead of the tournament in Brazil.

"The NFF are doing a wonderful job, they have been working hard to ensure we get the best preparations before the World Cup," he said.

The Super Eagles have already finalised friendly dates with Mexico, Greece and United States. Scotland have also been offered the chance to play Nigeria in a friendly at Fulham's Craven Cottage ground in May.

Nigeria have been drawn in World Cup Group F alongside Argentina, Bosnia and Herzegovina and Iran.