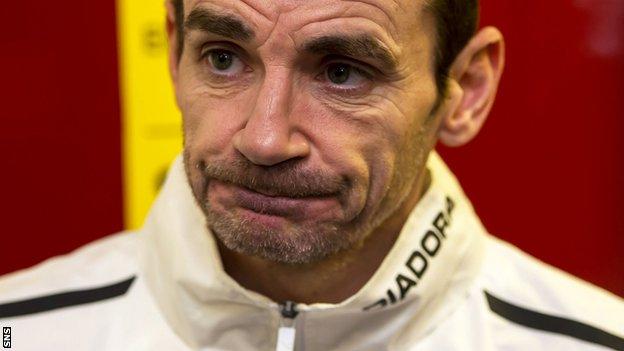 Lennon and Adams were sent to the stand during and over the row.

But the Buddies boss now considers the matter "water under the bridge".

"What I said, I said, so I can only apologise for that and we move on," said Lennon.

Adams and Lennon have been cited by the SFA for adopting "a threatening and aggressive attitude towards an opposing member of team staff" while Lennon is also accused of repeated use of offensive and insulting language.

"I have a lot of respect for Derek Adams and what he has achieved in the game although my words and actions didn't reflect that last Saturday," insisted Lennon.

"We will wait to see what the hearing brings."

The Paisley side host Kilmarnock this coming Saturday with Lennon's men hoping to avoid a sixth straight defeat in the Scottish Premiership.

St Mirren currently occupy the relegation play-off spot in the division, a point behind County and Partick Thistle.

"These things hurt. Sometimes, as a man, your reputation is all that you have.

"With 11 games remaining we must use every one of them to get our reputation back to where it belongs.

"There are three points separating four teams so it shows how competitive and tight it is.

"We are doing everything within our power to turn it around and I do believe that I have the right people in that dressing room.

"But the talking has to stop, the action has to happen on the park."