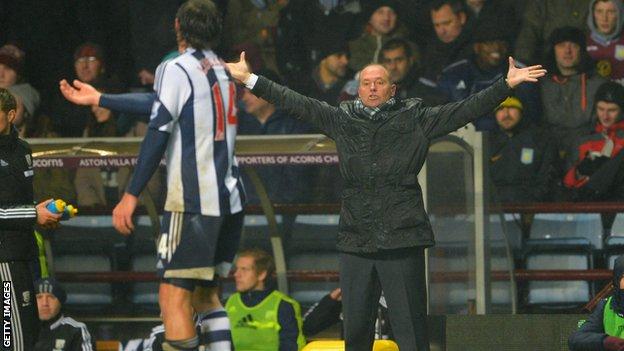 West Brom have parted company with director of technical performance and scouting David McDonough, who has left the club by mutual consent.

He was a key figure in the recruitment and appointment of Spaniard Pepe Mel as the Baggies' head coach in January.

McDonough, who is fluent in Spanish, had taken an active role at the training ground under Mel.

Former Real Betis manager Mel, 51, is under pressure after failing to win any of his first six games in charge.

"Pepe Mel is more vulnerable now that McDonough has gone.

"It may appear ludicrous that someone who's been in charge for just six games should be twitchy, but that's how the latest ridiculously wealthy TV deal affects owners terrified of relegation from the Premier League.

"The landscape is now a deal more neurotic and Pepe Mel needs to start winning games soon to placate a chairman who never hesitates to act with cold detachment."

Albion have drawn four and lost two Premier League games since Mel took charge of the first team on 9 January, a run that has left them one point above the relegation zone.

The club responded to growing speculation about Mel's future by issuing a statement on Wednesday claiming "constructive" discussions had taken place that reaffirmed the commitment of the staff at The Hawthorns to improve results,

BBC Sport's Pat Murphy said on 5 live that McDonough's departure was significant because "he drove through the appointment of Mel and for some time had the ear of Jeremy Peace, the West Brom chairman".

He added: "Mr Peace has heeded the scepticism from the dressing room [towards McDonough] and acted with characteristic ruthlessness. The players now owe him. But Mel will be shifting even more uneasily as a result.

"He has lost his key ally, the one who convinced Mr Peace that West Brom's season could be turned around by a stranger to English football, imposing a Spanish style of play, with games running out and a language difficulty thrown in."

The Baggies do not play this weekend because their scheduled opponents Sunderland face Manchester City in Sunday's Capital One Cup final and their next game is at home to Manchester United on 8 March.