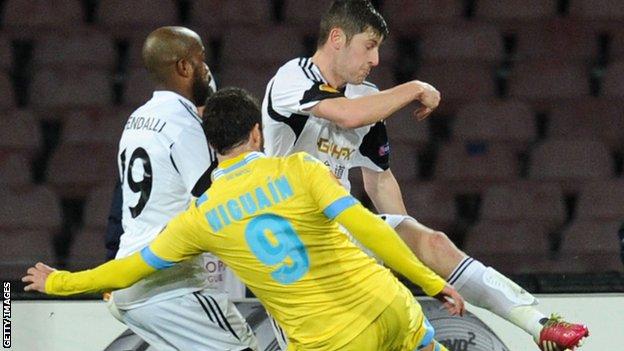 Swansea City defender Ben Davies says the team will take a lot of positives from their cruel Europa League exit against Napoli.

The Swans were heading for the last 16 of the competition until two late goals helped the Serie A side to a 3-1 win.

"I think we'll come away with a lot of respect from people after that game," said Davies.

"We've got to be proud of ourselves that we gave them a game."

The Swans only needed a score draw in Naples to progress.

Rafa Benitez's Napoli were strong favourites however, having played in the Champions League earlier this season and having lost only once at home all season.

Swansea who are 12th in the Premier League were not intimidated by their hosts and attacked throughout the match.

Jonathan de Guzman cancelled out Lorenzo Insigne's opener and the Welsh side continued to be a threat.

Swans top scorer Wilfried Bony had a chance to put his side 2-1 ahead in the second half but headed the ball straight at Napoli keeper Pepe Reina.

Gonzalo Higuain and Gokhan Inler fired in late goals to knock Swansea out.

"To be 1-1 and getting an away goal here is not an easy job at all," said Davies.

"We did the hard part unfortunately we just couldn't take our chances in the second half and kill the game off.

"It's disappointing for us but looking back at it after the game we've got to be proud of our performance."

Swansea played 12 games to reach the last 32 of the Europa League, which included a famous 3-0 away win against Spanish side Valencia.

Davies says it his something he will never forget.

"It's been tough at times the amount of games we've had," he said.

"But this may happen just once in a lifetime for some of us.

"So it's a great experience and something we'll always remember."