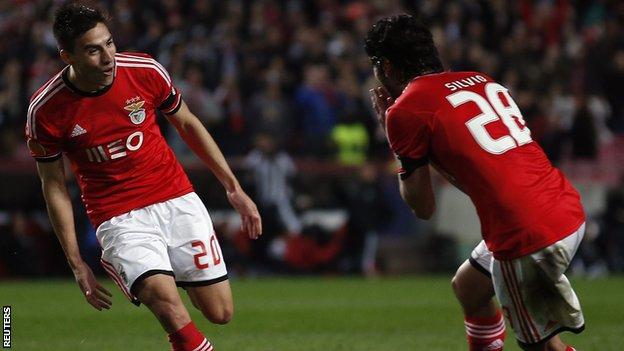 Benfica secured a meeting with Tottenham in the last 16 of the Europe League with a 3-0 win over PAOK.

The Portuguese side scored all their goals within nine minutes during the second half to book their place with a 4-0 aggregate victory.

The Italian side, currently at the top of Serie A, had few problems with their Turkish hosts following goals in the first half from Arturo Vidal and Southampton's on-loan striker Dani Osvaldo.

Lazio were knocked out by Ludogorets Razgrad in Sofia, when the Bulgarian side's Juninho Quixada made the score 3-3 on the night with only two minutes of normal time remaining.

The Italians were close to progressing on away goals when substitute Miroslav Klose scored after 81 minutes, but Quixada's equaliser on the night put Ludogorets through with a 4-3 win overall.

Porto will meet Napoli after an enthralling meeting with Eintracht Frankfurt that saw the Portuguese side win on the away goals rule.

Nabil Ghilas pounced on a rebound with only four minutes left to make the score 3-3 in Germany, but it was Porto who progressed with the tie finishing at 5-5.

Viktoria Plzen qualified for the last 16 at the expense of Shakhtar Donetsk. Following last week's 1-1 draw, the Czech side were 2-0 ahead through goals from Daniel Kolar and Milan Petrzela before half-time and remained ahead despite Luiz Adriano pulling a goal back just before full-time.

Ajax, who currently lead the Dutch Eredivisie, were routed 6-1 on aggregate by Red Bull Salzburg following a 3-1 defeat in Austria but compatriots AZ drew 1-1 at home with Liberec to qualify with a 2-1 overall win.