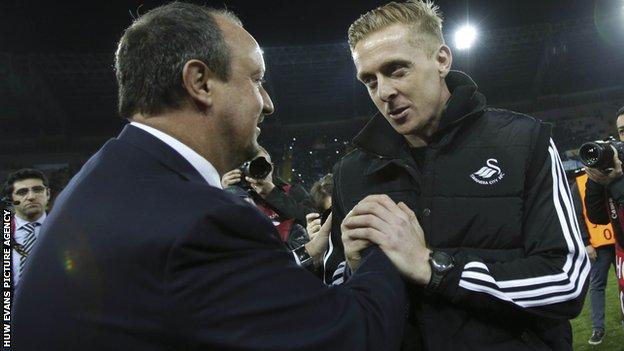 Swansea City manager Garry Monk says he is proud of his players despite their Europa League exit against Napoli.

His side were within 12 minutes of reaching the last 16 until goals by Gonzalo Higuain and Gokhan Inler helped the Serie A side to a 3-1 home win.

"I'm gutted for the players," said Monk, whose side drew the first leg 0-0. "They deserved to win both games.

"I don't want them to be downbeat because they don't have to be. They can really hold their heads high."

After falling behind to a Lorenzo Insigne goal, Swansea equalised through Jonathan de Guzman's strike.

Wilfried Bony missed a great chance to put the visitors in front when he headed straight at goalkeeper Pepe Reina just after the hour, and Napoli punished Swansea with two late goals.

Monk hopes his side will carry the performance - against a side that have lost only once at the Stadio San Paolo this season - into the remainder of their Premier League campaign.

"We haven't just come here as most teams will this season and sit and hope to get a result," said Monk.

"We've come here with the belief that we can get a result and try and get on the front foot.

"The boys should be proud of themselves and take the belief from this game that we can compete over two legs with such a good team, into our league and hold no fear against anyone."

Napoli coach Rafael Benitez said: "We deserved to go through.

"We have to give them credit - they made life difficult for us. They defended well and made us work very hard.

"Swansea played without pressure and when you have less pressure, you make less mistakes.

"But we have to be satisfied to have won against a very difficult rival and we are happy to progress."

Napoli face FC Porto in the last 16, with the first leg played on 20 March.