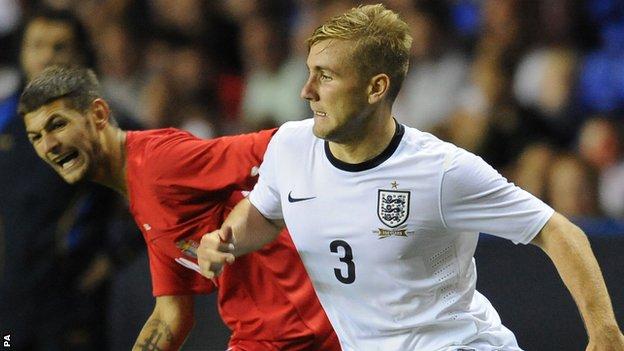 Luke Shaw has described his call-up for England's friendly against Denmark at Wembley on Wednesday as "unbelievable".

The Southampton teenager only made his Premier League debut last season and he is now a serious contender to make England's World Cup squad for Brazil.

"I thought I was going to be called up to the Under-21s but to get a senior call is unbelievable," said Shaw.

"It's a proud day. I'm only 18. I cannot believe it. I am really excited. It's a massive confidence boost."

Left-back Shaw is part of manager Roy Hodgson's 30-man England squad and is likely to make his debut on Wednesday.

"Roy rang me this morning and told me I was in the senior team, and that I was there on merit," said Shaw. "I wasn't expecting it. I didn't know what to say."

Hodgson said: "I think everyone who has watched him play recently will not deny that he deserves a place in a large squad like this.

"It would be nice if he gets to play on Wednesday night, but that decision hasn't been made."

Shaw was rejected by Arsenal, Chelsea and Fulham as a youngster and was signed by Southampton as an eight-year-old.

He featured in Saints' Capital One Cup ties at the start of the 2012-13 season and was given a surprise Premier League debut at West Brom in November that year.

His performances this season have attracted speculation that both Manchester clubs, Chelsea and Arsenal are keen to sign him.

Shaw said thoughts of playing in Brazil had never crossed his mind.

But he added: "There is a friendly and hopefully I will get some game time and keep up the performances I have been having at Southampton and then who knows what will happen."