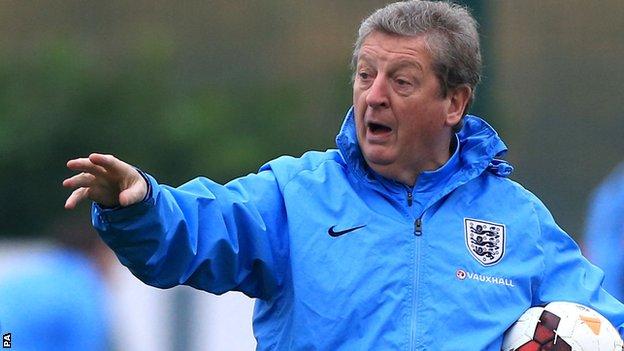 England manager Roy Hodgson says he is prepared to leave experienced players out of his World Cup squad.

Hodgson must decide on his 23 names for the tournament in Brazil by 2 June.

"I am very conscious that I could have to leave a big name out," he said. "It wasn't easy before the Euros, this time it will be even harder."

Ashley Cole, England's most-capped left-back with 106 appearances, has not played regularly for Chelsea this season and faces competition from Everton's Leighton Baines and the uncapped Shaw from the list for the Denmark friendly.

"Before the Euros at least I was choosing names of players I knew and players I had seen play but had never really worked with," said former West Brom manager Hodgson, who was appointed England manager in May 2012.

"This time I will have to disappoint some people I have worked with who have maybe done a good job for me and the team."

The 30 players Hodgson will consider for the meeting with Denmark on Tuesday include several who have been given first caps this season, including Southampton striker Rickie Lambert and Everton midfielder Ross Barkley.

More experienced names omitted include Gareth Barry, who has impressed on loan from Manchester City alongside Barkley at Everton, and Sunderland winger Adam Johnson.

"This is not a definitive list," Hodgson added. "The fact someone is on this list does not say he will be going or be one of the seven standby players because I reserve the right to change my mind on those subjects."