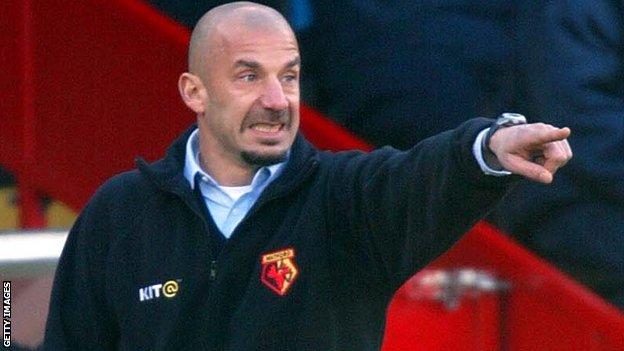 Manchester United manager David Moyes would have been "sacked three times" if he was managing in Serie A, says former Chelsea boss Gianluca Vialli.

He is keen to make a return, but would not do so in Italy, where he believes managers are under too much pressure.

"In Italy, managers are judged simply by results," he told BBC Radio 4. "Italian managers don't enjoy themselves at all."

Eight Premier League managers have been sacked this season, compared to 10 in Serie A.

"David Moyes, in Italy, would have been sacked three times now," said Vialli, referring to Manchester United, who have won only four of their last 12 games in all competitions and are out of the FA Cup and League Cup.

"In the Premier League you get the feeling they give you a bit longer to sort out problems.

"They are more understanding and, most importantly, owners of football clubs don't think they know more than managers.

"They let managers run it for a while and don't just sack you after the first two or three defeats."

Vialli, who won 59 caps for Italy, managed in the Premier League with Chelsea, guiding them to League Cup, Cup Winners' Cup and Uefa Super Cup triumphs before he was sacked five games into the 2000-01 season.

He then took charge of Championship side Watford but was dismissed the following summer after the Hornets finished 14th.