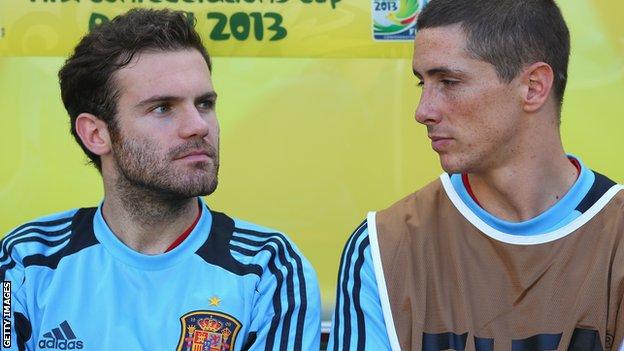 Manchester United forward Juan Mata and Chelsea striker Fernando Torres have been left out of the Spain squad for next Wednesday's friendly with Italy in Madrid.

Mata, 25, joined United for £37m in January, while Torres, 29, misses out despite scoring for Chelsea in the 1-1 Champions League draw with Galatasaray on Wednesday.

"This is just a squad to play Italy, not for the World Cup," said coach Vicentre del Bosque. "Some players not on this list have a lot of merit."

Atletico Madrid striker Diego Costa has been included and could make his debut for Spain.

Brazil-born Costa, who has scored 27 goals for Atletico this season, was called up for the friendlies against Equatorial Guinea and South Africa last November, but missed both with injury.