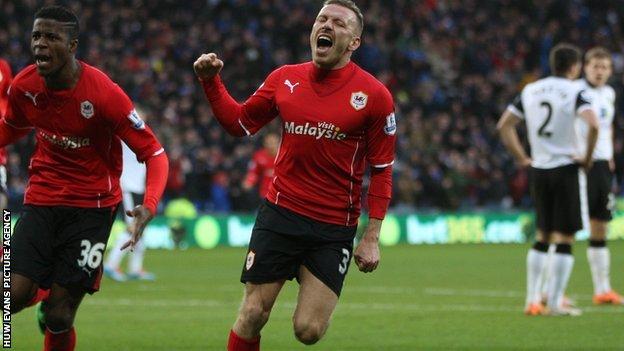 Craig Bellamy wants to make up for his three-match suspension by playing his part in Cardiff City's battle against relegation.

Bellamy, 34, is available for Sunday's Premier League game at Tottenham, but admits he found it tough to not be involved in the matches.

"The three games I did miss were difficult games to watch," he said.

"Hopefully I have an opportunity to make up for it from now until the end of the season."

Bellamy was suspended for the league matches against Aston Villa and Hull City as well as the FA Cup home defeat to Wigan Athletic.

The Football Association charged Bellamy with violent conduct after television cameras showed his altercation with De Guzman, which happened during Cardiff's 3-0 league defeat at the Liberty Stadium on 8 February.

"I was disappointed with the suspension," added Bellamy. "The club wanted to appeal but it was me who chose not to as I didn't want my name dragged through anything or accuse anyone of anything.

"So you just get on with it, take your ban, move on and look forward to the games coming up.

"I spoke to De Guzman and had a good conversation with him. It [the incident] wasn't the cleverest thing I've ever done but it wasn't the worst I've done either."

Bellamy served the last match of his ban last Saturday, when Cardiff lost 4-0 at home to Hull City, which left the Bluebirds three points from safety in 19th place.

"The way he goes about it, I quite like and admire as well," Bellamy said.

"I had a lot of respect for him as a player and he's come into a difficult situation.

"But he's positive and wants us all to keep believing and to show our character. This is a real test, for all of us."