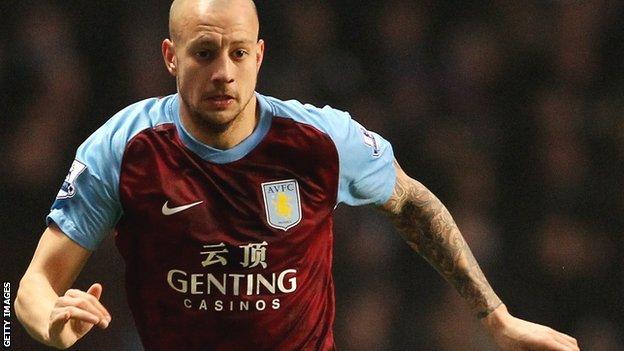 The Scotland international, 29, has not played for Villa since May 2012.

Villa boss Paul Lambert last week admitted that Hutton, who earns a reported £40,000 a week, was unlikely to play for the club again because of financial constraints.

Hutton, whose contract at Villa Park expires in the summer of 2015, joins Bolton as injury cover for Matt Mills.

Wanderers manager Dougie Freedman confirmed that 27-year-old Mills could miss up to three weeks with a knee strain, but said it could have been worse for the ex-Leicester, Reading, Doncaster and Manchester City man.

"With Matt we have just dodged a bullet because it is a strain of the anterior cruciate ligament," Freedman told BBC Radio Manchester.

Former Tottenham and Rangers defender Hutton spent a month on loan at Nottingham Forest in December 2012. He was then loaned to Spanish side Real Mallorca the following month until the end of that campaign.

Despite being out of favour at Villa Park, the defender has also continued to represent Scotland and earned his 38th cap in October's final World Cup qualifier, a 2-0 victory over Croatia.

Hutton is available to face Blackburn on Saturday. If he does feature, it will be his first competitive club fixture this term.

"Alan wants to come, wants to play, wants to prove himself - he wants to get in the national team, and we will benefit from it."