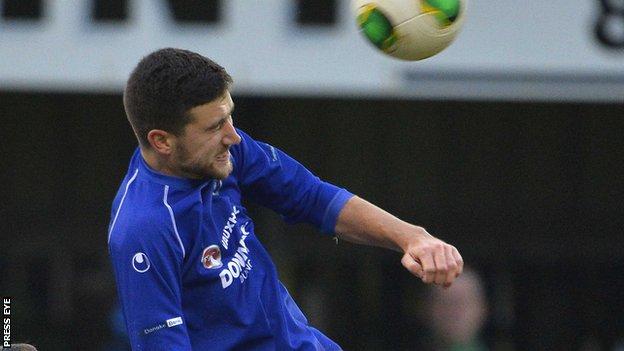 Dungannon Swifts will be without Terry Fitzpatrick and Cameron Grieve for the Irish Cup quarter-final against Ballymena United at the Showgrounds.

The pair are suspended while bans keep Ballymena's Gary Thompson and Mark Surgenor out of the Showgrounds match.

Tune in for live coverage of the five Irish Cup matches on Saturday Sportsound on Radio Ulster, presented by Michael McNamee from 14:00 GMT.

We'll have commentary from the quarter-final between Ballymena United and Dungannon Swifts and Glentoran's sixth round replay against Armagh City.

There will be updates from the other three games while the semi-final draw is at 5.20, although this may be slightly later it there is extra-time at the Oval.

"We had a go against Cliftonville, we had a rattle and we'll probably do the same at Ballymena," he said.

"We'll be brave although we know how tough this game is going to be.

"It's a difficult place to go - they've beaten us three times in the league this season and it's definitely a hard draw.

"But it's cup football, you never know what is going to happen and it is also nice to get a break from the pressure of the league."

Ballyclare are aiming for a giant-killing display against Crusaders but they are missing the suspended Jonathan McClurg for the trip to Seaview.

Championship Two minnows Queen's University, who are home to Bangor, will play in the quarter-finals for the first time since 1972,

"It's like a fairytale - when we joined the Irish League we were the whipping boys but we knew the good times were coming," said manager Peter Thompson.

"Bangor are riding high in Championship One, they've got experienced players and a good manager.

"We fully understand that this is going to be a really difficult match but we will give it our all and we're going to enjoy it."

Glentoran have suffered a blow ahead of their sixth round replay against Armagh City at the Oval.

Midfielder Marcus Kane is set for a long spell on the sidelines after sustaining a knee injury in a reserves game last week.

Ballinamallard and Glenavon will try for a fourth time to complete their sixth round tie at Ferney Park.

The first two attempts were postponed before the game was abandoned before half-time after heavy rain led to a waterlogged pitch.