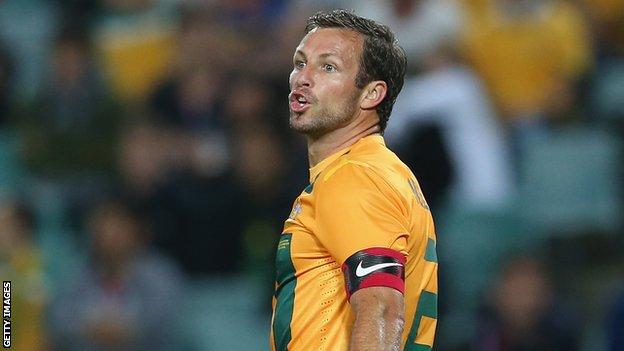 Watford defender Lucas Neill has said a desire to cement a place in Australia's World Cup squad prompted his return to English football.

The 35-year-old, who joined the Hornets this week, is not in the Socceroos squad to face Ecuador in London.

He told BBC Three Counties Radio: "This is one of the most important years in a footballer's career with the World Cup and a potential Asian Cup in Australia.

"There's a lot of exciting football I want to play in."

Australia will host the Asian Cup in January next year.

Neill, who has featured at two World Cups, played for Millwall, West Ham, Blackburn and Everton in England before leaving the Toffees in 2010 for Turkish club Galatasaray.

Spells in the United Arab Emirates, Sydney and Japan have followed.

But Neil, who can play at right-back as well as at centre-half, hopes a stint in the Championship will keep him in the plans of Australia boss Ange Postecoglou - who has named an experimental squad for the Ecuador friendly on 5 March at Millwall.

With defender Rhys Williams a doubt for the World Cup because of an Achilles injury, Neill is hoping to book a place on the trip to Brazil this summer.

"From my point of view it's not a fitness thing - I've been training for six weeks now," said Neill, who was a free agent when he signed a deal until the end of the season at Vicarage Road.

"There's a few players in the Australia squad who are in leagues such as the MLS or in China which haven't started yet.

"Rhys Williams at Middlesbrough has left a big hole in our defence and we have a lot of untried and untested players.

"The manager has this game only to work out what sort of defenders he is going to take to the World Cup and he's probably seen enough of me to know what I can and can't do.

"The message to me was to get used to to the environment at Watford and push for a position as soon as possible."