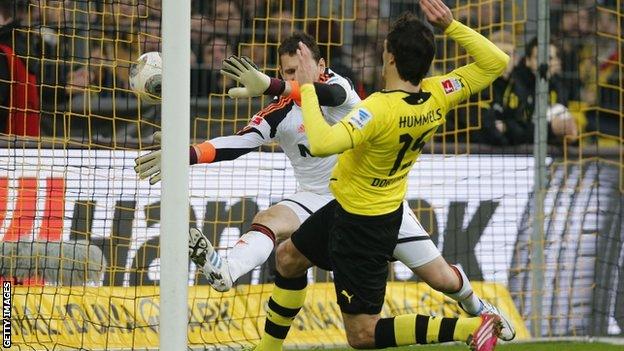 Borussia Dortmund moved into second place in the Bundesliga as they built on their midweek Champions League victory over Zenit St Petersburg with a win over Nuremberg.

Germany defender Mats Hummels marked his first game in four weeks by netting from close range to open the scoring.

Mkhitaryan sealed the win with a low shot for his second goal in four games.

Manager Jurgen Klopp set a new Borussia Dortmund record by winning his 112th Bundesliga game with the club. He overtook Ottmar Hitzfeld by one win.

Jurgen Klopp's side followed up Tuesday's 4-2 win in Russia to leapfrog Bayer Leverkusen, who crashed 1-0 at home to Mainz, their fifth straight defeat and eighth loss in 10 games.

"The team operated at a high level, which was necessary as Nuremberg began well and they had their chances," said Klopp.

Hummels, having recovered from a foot injury, tapped home from close range after Lewandowski's header was saved and the Pole then converted Mkhitaryan's pass for his 15th goal of the season.

Mkhitaryan secured the win as he finished from the centre of the penalty area following Jonas Hofmann's cross.

Leverkusen last won on 1 February, a run including a 4-0 home defeat by Paris St-Germain in the Champions League.

Cameroon striker Eric Choupo-Moting scored Schalke's only goal on 37 minutes after being set up by Stefan Bell.

"My boys had tried to fight, but the belief and the ease was missing from our game," said Leverkusen manager Sami Hyypia.