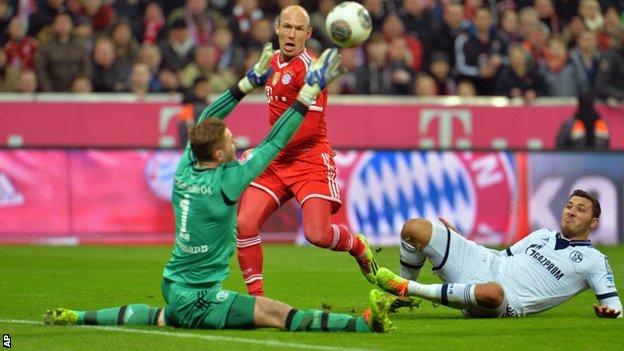 David Alaba opened the scoring in the third minute before Netherlands forward Robben chipped in his first goal.

Mario Mandzukic's header made it 3-0 and Robben's angled drive put Bayern 4-0 ahead within the first 30 minutes.

Bayern's Rafinha put through his own net but Robben scored a penalty as Kyriakos Papadopoulos was sent off.

1 June: Became the first German side to win the 'Treble' with a 3-2 German Cup final win against Stuttgart

The defending Bundesliga and European champions entertain Arsenal on 11 March with a 2-0 lead from the first leg in their Champions League last-16 first leg tie.

Having been hammered 6-1 at home by Cristiano Ronaldo's Real Madrid on Wednesday in the Champions League last 16, Schalke were again put to the sword as Bayern cruised to victory.

With just three minutes gone, left-back Alaba netted a free-kick, then Robben scored either side of Mandzukic's headed goal from a superb Alaba cross to make it 4-0 at the break.

Schalke were gifted a goal when Jefferson Farfan's corner was turned into his own net by Munich right-back Rafinha with 25 minutes left.

To compound Schalke's misery at Munich's Allianz Arena, Greece centre-back Papadopoulos was shown a straight red card for bringing down Mandzukic in the area.

His foul allowed Robben to wrap up his hat-trick with a 77th-minute penalty.

Shots on Target
Home12
Away4