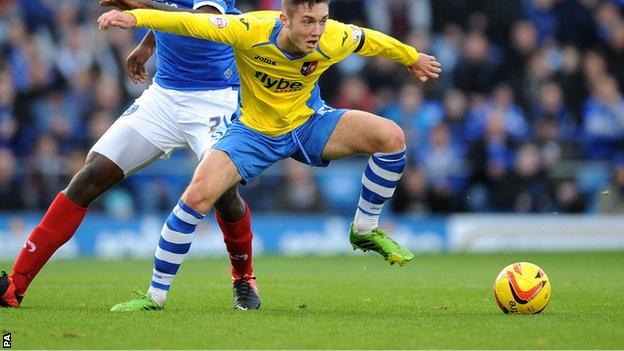 The 18-year-old academy graduate has made 19 starts this season.

"He definitely has the ability to go up the leagues and play at a very good level," Tisdale told BBC Radio Devon.

There will be a bit of luck involved, like coming across the right manager and being injury-free, but there's no doubt about his potential.

"I wouldn't like to say at this stage what that will be but, arguably, he's the best young player we've produced at Exeter since I've been here."

Tisdale is the longest-serving manager in the Football League, having taken the helm in June 2006.

"Players progress at different speeds and you have to look at what they have in their game naturally and then also at their application and their determination to improve themselves," added Tisdale.

"For someone who's 18 and playing regularly in League Two, he's technically very good and has a very good understanding of the game.

"Instinctively, he makes good decisions most of the time and, coupled with that, he's determined to do well.

"He's not phased by the pressure and stress of playing and, most importantly, he takes on information very well.

"Ultimately, there will be a bit of luck involved like coming across the right manager and being injury-free, but there's no doubt about his potential."

During Tisdale's tenure, the likes of Dean Moxey (Derby County, Crystal Palace), George Friend (Wolves, Doncaster, Middlesbrough) and Danny Seaborne (Southampton, Yeovil, Coventry) have all gone to play at a higher level after coming through the club's youth set-up.

The fan-owned club's business model is partly based on the ability to produce young players to sell on for a profit.

Exeter's academy side are in the quarter-finals of the Under-21 Premier League Cup, where they will face Burnley, having already beaten Torquay United, Crystal Palace, Southampton and Blackburn Rovers.