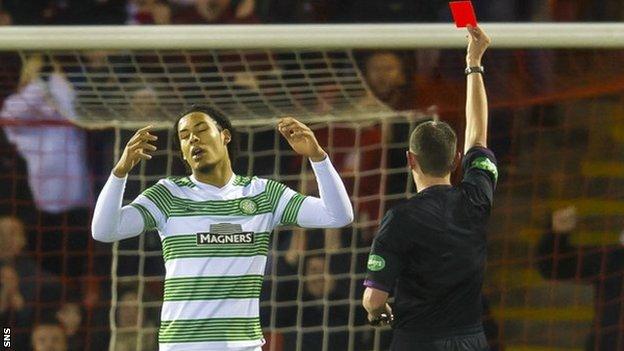 Celtic have appealed against the red card shown to defender Virgil van Dijk during Tuesday's defeat by Aberdeen.

It means that the Dutch defender will be free to play for Neil Lennon's side when they host Inverness Caledonian Thistle on Saturday.

Van Dijk was sent off for a last-man challenge on Peter Pawlett after 12 minutes of the 2-1 loss at Pittodrie.

It is not like we are wasting anybody's time on it. We feel we have a decent case

Lennon was also unhappy that Thomson did not award the Scottish Premiership leaders a penalty for what he believes was a hand ball by Mark Reynolds.

Lennon said: "We are appealing because we think it is worthy of an appeal.

"My mind hasn't changed. I think Pawlett was going wider and I think Efe Ambrose could have got across to cover.

"We will see what the outcome will be. You just never know with these things.

"It is not like we are wasting anybody's time on it. We feel we have a decent case."

The defeat by second-top Aberdeen ended Celtic's run of 29 top-flight matches without defeat, stretching back to last season.