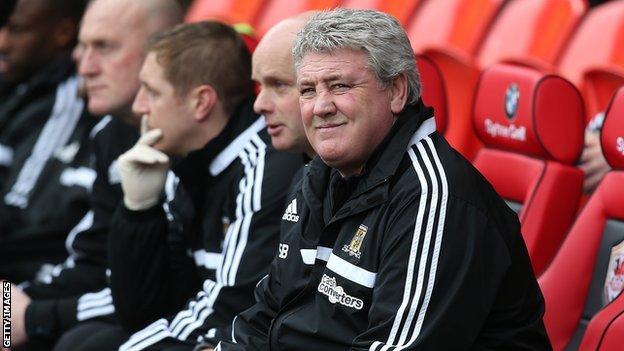 Hull City boss Steve Bruce plans to discuss his contract situation with the club's owners at the end of the season.

Bruce, 53, took the Tigers up to the Premier League at the end of his first season in charge last May and has 15 months left on his current deal.

Hull are 11th in the table and host Bruce's former club Sunderland for an FA Cup semi-final place next week.

"I'm very happy here and I would have thought we'll sit down in the summer," he told BBC Radio Humberside.

"In football management, you're always wary that there is a dark moment around the corner so I just want to get the season finished with us in this division.

"It's a hard job managing in the big league and it fatigues you but it's what I do and what I enjoy. There is no feeling quite like winning on a Saturday afternoon.

"The Hull people and supporters have made me very welcome here, which is a big turnaround from my last club, where they couldn't wait to get me out of the door."

The former Birmingham City, Wigan and Black Cats boss took over at the KC Stadium in June 2012 and led the club to second place in the Championship last season.

The Tigers, who play Newcastle on Saturday, are six points above the relegation zone after an impressive 4-0 win at Cardiff last week.

Bruce believes the club need two more wins from their remaining 11 matches to ensure their survival in the top flight.

"I've said all along that you need 10 wins to stay up and I'm not going to change from that," he added.

"If we can win our next two games then I think that will be enough because you're always going to draw a few games.

"There's that many teams at the bottom that I can't see that many getting to 38 points."