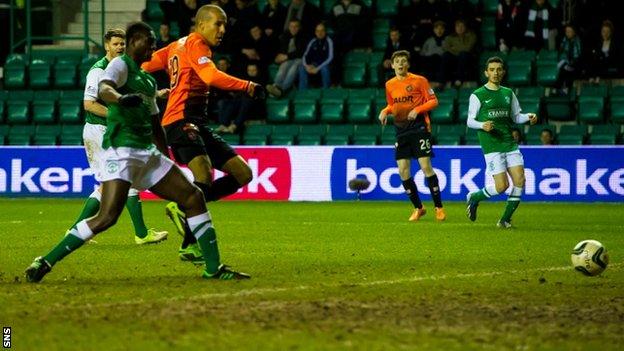 Nadir Ciftci, Gavin Gunning and Farid El Alagui all hit the net for the visitors and it could have been more but for two missed penalties.

Jordon Forster had scored a first-half equaliser, but the result was in little doubt when Tom Taiwo was sent off.

"We were worthy winners tonight," McNamara told BBC Scotland. "We were excellent right throughout the team."

I'll never criticise them because them two have scored penalties for us earlier in the season. It just means someone else is in line to take the next penalty

The result could have been more comfortable, but Ciftci had a tame first-half penalty saved and Gary Mackay-Steven also blazed a second effort over the bar.

"He's took one earlier in the season and he's scored in similar fashion," McNamara said of Ciftci's miss. "It's one of them ones that, if he scores it, then we're not talking about that, we're talking about a good penalty. But, when they miss, it looks bad the way he runs up to it and slows it down.

"I didn't look at Mackay-Steven's penalty - I was looking the other way.

"The first one they were saying it was outside the box, but I thought we could have had another in the second half - but we'd probably have missed it anyway!

"I'll never criticise them because them two have scored penalties for us earlier in the season. It just means someone else is in line to take the next penalty."

The Tannadice boss admitted he was frustrated to see his side pegged back before half-time when Radoslaw Cierzniak's mistake handed Forster the equaliser.

"I think it gave the Hibs fans a lift a couple of times with missing the penalties, but apart from that, I don't think they had much to shout about," said McNamara.

"We were really disappointed to go in at 1-1 at half-time. We had possession in the final third and we ended up passing the ball back to our goalkeeper and they end up working a corner from it.

"But it's a game we should have wrapped up well before we did."