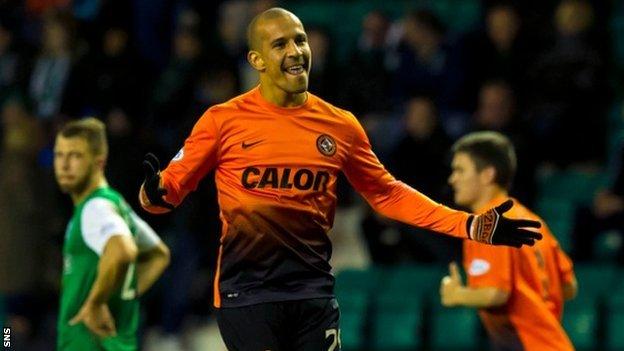 Hibernian's manager has apologised to fans for their defeat on the day the club launched on an appeal to join "Terry Butcher's Green and White Army".

"Of course I'm not happy and I apologise to the Hibs fans because it's not acceptable again," said Butcher.

"We've had a few of these this year, not too many wins and a lot of games like this where we've been nowhere near the standards that we expect and want."

Hibs' website is bedecked with green camouflage, describing itself as "online headquarters" and that it is "recruiting here".

"I've never known a campaign like it," said Butcher ahead of the match at Easter Road.

"We've gone on the army theme. We are trying to recruit people to come along. My son's in the Army, so it touches my heart."

However, he admitted after the game - United's fourth defeat in five home games - that Hibs are a long way from making Easter Road a fortress and that a few players will be demobbed in the summer.

"We know the size of the task - it hasn't changed," said the Englishman. "It just re-enforces our opinions about some of the people.

Anything that could go wrong did go wrong. The only good thing is that they missed two penalties

"But we've got to work with these guys. These guys are genuinely honest guys, they're hurting, but we have to be much better than that.

"The summer is a long way off. Players can determine whether they can stay here or not and the performances tell the whole story.

"It is a 90-minute audition every game that they play. They know that already."

United had gone ahead through Nadir Ciftci before a mistake by goalkeeper Radoslaw Cierzniak handed Jordon Forster an equaliser just before half-time.

However, goals from Gavin Gunning and Farid El Alagui, with a red card for Hibs midfielder Tom Taiwo sandwiched between, ensured a win for United.

"The boys put plenty of effort in, I thought Dundee United put more effort in, which is unacceptable and they were by far the better side," said Butcher.

"I don't have any complaints about the result.

"We got the lifeline just before half-time and unusually we concede a goal from a corner again.

"It's another kick in the stomach and we haven't come back from that.

"And, of course, the sending off does not help our cause and I think Tom on the night was our best midfield player.

"Anything that could go wrong did go wrong. The only good thing is that they missed two penalties.

"We looked the opposite and that's not how we've been playing or how we want to play."