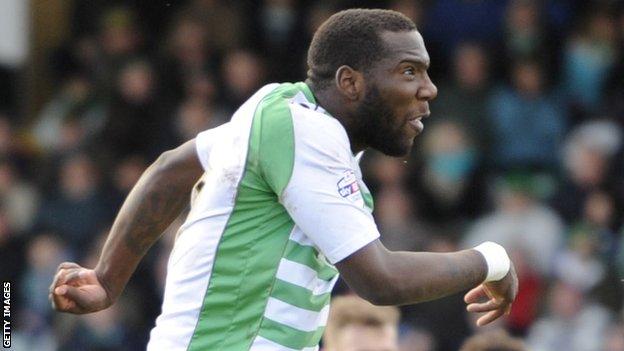 Ishmael Miller scored both goals as lowly Yeovil beat 10-man Sheffield Wednesday to stretch their unbeaten run in the Championship to five matches.

Miller scored either side of half-time as the Glovers, who are two points from safety, made it back-to-back wins at home for the first time this season.

Jacques Maghoma and Glenn Loovens went close for Wednesday, who had Sam Hutchinson sent off for two bookings.

Defeat brought an end to the Owls' nine-game unbeaten run away from home.

The visitors were the first to threaten when Maghoma's strike was palmed away by Marek Stech in the Yeovil goal.

Miller looked dangerous from the outset and forced a good save from Wednesday goalkeeper Damian Martinez before having a goal ruled out for offside.

And four minutes before half-time he broke the deadlock, latching on to Tom Lawrence's flick before driving the ball home.

Six minutes after the restart, Miller doubled his team's advantage with an unstoppable 20-yard strike to take his tally for the season to seven goals.

Loovens headed over late on as Wednesday looked to reduce the deficit, but their misery was compounded when Hutchinson was dismissed for two bookable offences inside the final six minutes.

"It was a super win, we had a lot of commitment out there and a lot of effort, Sheffield Wednesday are in a rich vein of form themselves.

"It's nice to now be five games undefeated, three draws and two wins, with a home game coming up against Ipswich on Tuesday. It's still very tight with all the other teams getting results as well,

"Charlton would have had a little bit of a panic attack today when the look at the results. We're certainly here now; we've even dragged a couple more teams slightly nearer to us as well,

"So it put more than just four teams, it's probably more like six or seven now, in the fight at the bottom there. Proud of the boys today because they played to the game plan with a lot of commitment and courage."

"I thought we bossed the game in the first 10 minutes without really threatening the goalkeeper.

"We had good possession and got into some good areas, but then, whether we thought it was going to be easy or whatever, Yeovil showed the fighting spirit that you do when you're in the bottom three.

"They thoroughly deserved the win; we didn't win enough one-against-one battles and I'm just disappointed with an under-par performance - our passing was really poor."