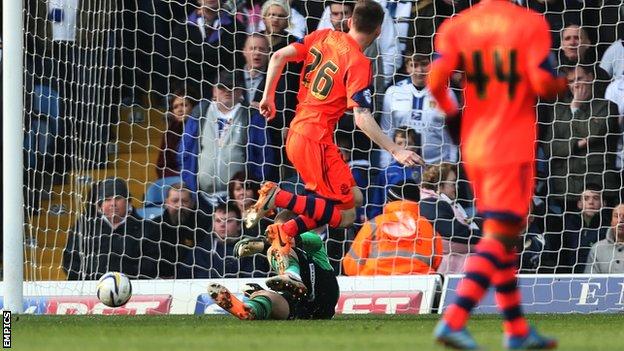 Bolton moved another step closer to Championship survival after a thumping win at Leeds.

Joe Mason slotted in just before the break to put the visitors in front and a Lukas Jutkiewicz header from Jay Spearing's free-kick extended the lead.

A shot from defender Zat Knight made it three before Mark Davies nodded in a Jutkiewicz cross as Leeds crumbled.

An Andre Moritz strike added Bolton's fifth before Matt Smith headed in a consolation for Leeds.

The defeat was a setback to the home side's play-off hopes and they are now eight points adrift of the top six.

The Yorkshire team were guilty of some careless passing and went behind on the stroke of half-time.

Neil Danns threaded a ball through for fellow loanee Mason, who drew goalkeeper Jack Butland off his line before finding the net.

Leeds left the field at the interval to a chorus of boos from supporters and their predicament worsened as they fell further behind after two goals in four minutes.

The first was from Jutkiewicz, before central defender Knight weaved his way through and fired past Butland.

Leeds appealed unsuccessfully for handball when a Tom Lees shot was blocked in the goalmouth and then conceded a fourth when Jutkiewicz crossed for Davies to head in.

Moritz blasted a Danns cross past Butland before Smith stooped to head home from point-blank range.

Bolton, though, secured a third successive league victory and have a 10-point cushion on the bottom three.

"Obviously I am bitterly disappointed. During the first half there was nothing in the game.

"They scored just before half-time, which was a blow. We got done quickly by two set-plays, lost our shape and that was it. You could tell the players were nervous in the first half.

"It is a bad day for us. We've had a couple like that, it's not acceptable and we have to analyse the reasons."

"In difficult moments this season we have tried to stay calm so we are trying to remain calm again despite a fantastic result against Leeds.

"We were terrific in both boxes and it was a fantastic professional performance from everybody involved.

"We controlled the midfield with our passing, with Neil Danns and Jay Spearing the key. Results are now starting to go with our performances."