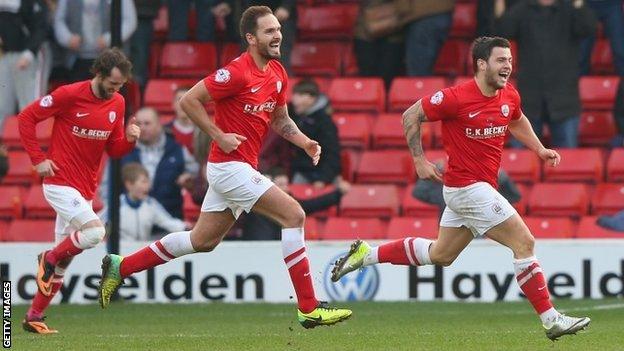 Dale Jennings' first goal for Barnsley was enough to earn all three points against Nottingham Forest and move the Tykes off the foot of the table.

The midfielder, who signed from Bayern Munich last summer, scored with a well-struck shot early in the second half.

Djamel Abdoun hit a post for Forest in the first half, while Jamie Mackie headed wide from close range.

Defeat for Billy Davies' side was their third in succession, having previously lost against Burnley and Wigan.

Manager Davies was forced to watch from the stands due to a five-match touchline ban for abusing a referee.

His opposite number Danny Wilson, guided his team to a fifth game without defeat at home and they remain two points away from safety.

They took control of this game early, though. Jennings threatened to open the scoring in the sixth minute but goalkeeper Karl Darlow was equal to his long-range attempt.

At the other end, Abdoun struck the foot of a post with a 25-yard half volley and then crossed to Mackie, who should have scored with a free header.

The deadlock was broken shortly after the break when Jennings cut in from the left and drove the ball past the outstretched arm of Darlow.

The hosts had their backs against the wall as the game reached its climax and Steele did well to save Abdoun's curling free-kick in injury time.

Barnsley manager Danny Wilson: "At the end, when they're throwing everything at us, we had to defend resolutely and I think everybody did, not just the back four.

"We didn't see the true us last week, over the last few months we've showed better resilience than we did last week but I think we went a long way to putting it right today.

"We responded very, very well and I have to say the fans were as good as we were today; absolutely top class, getting behind us."

Nottingham Forest deputy manager David Kelly: "It's different with the gaffer not being there because he's the leader, he's the focal point of the team.

"Communication was a little bit difficult with the phones; phones don't really work in football grounds. But we had conversations going on.

"I'm just a little bit disappointed we couldn't break them down, they defended for their lives."