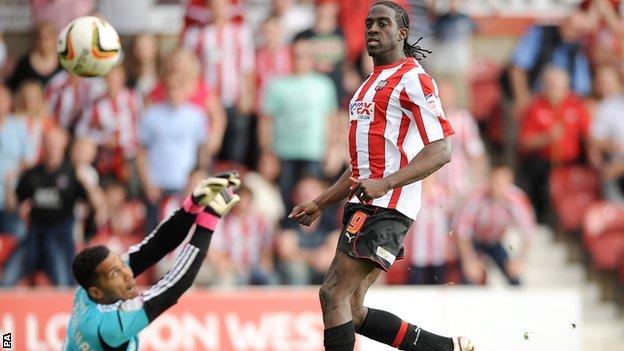 Clayton Donaldson struck his 15th goal of the season to help Brentford ease to victory over Bradford City.

Neither goalkeeper had a save to make in a drab first period which saw the Bees dominate for large parts.

The breakthrough came when Donaldson's left-footed strike from just outside the box found the bottom corner.

Donaldson should have made it two but fired over from five-yards before the points were secured through George Saville's effort that found the corner.

Brentford, who have now lost just one of their last 22 games climb to within a point of second-placed Leyton Orient while Bradford who have won just twice since 23 November remain in mid-table.

The Bees started strongly playing some excellent football with Will Grigg at the centre of much of the good work.

Despite enjoying more than their fair share of possession, Brentford failed to make any clear cut chances and instead it was the visitors who had the best chance of the half but Chris Atkinson fired over when well placed.

After the break the hosts upped the tempo and both Grigg and Donaldson put wide when they should have done better.

But Donaldson's excellent strike settled the nerves and gave the Bees a much need lift.

Donaldson somehow ballooned over shortly after before Jonathan Douglas hit the bar but Saville's poke into the bottom corner made the points safe.