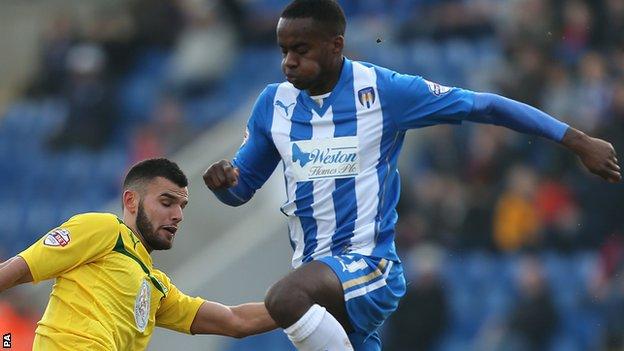 Colchester picked up their first win in seven games at the expense of Coventry in League One.

Freddie Sears opened the scoring early on for the hosts when he confidently slotted past goalkeeper Joe Murphy.

Gavin Massey doubled the lead with a low finish from David Wright's long pass, while Sam Walker kept out Chuba Akpom's effort at the other end.

Callum Wilson squeezed a low strike into the far bottom corner for the Sky Blues, but missed two late chances.

"We're very pleased for everybody - pleased for the fans that stuck with us. It was a great win all-round.

"Freddie [Sears] took his goal exceptionally well, he looked sharp. It was a good finish, a good run in behind.

"We wanted to get the ball wide and get in behind their back four and use the pace. We played a bit more direct and the goals and chances we created were testament to that.

"We have a robust defence and a threat going forward to hit on the counter-attacks if we need. Second half, defensively we were excellent."

"If you take away the opening 20-minute period and our defending in it, we actually did quite a lot of good things.

"We worked really hard and created a lot of really good chances.

"I thought our two strikers were excellent today, and in the end I think we should have had the point.

"We have to come to these places and get the points and that's the bottom line.

"We've making life far too difficult for ourselves. We have to be far more aggressive in our defending. We had three big chances away from home and we're feeling that we should have got something from the game."