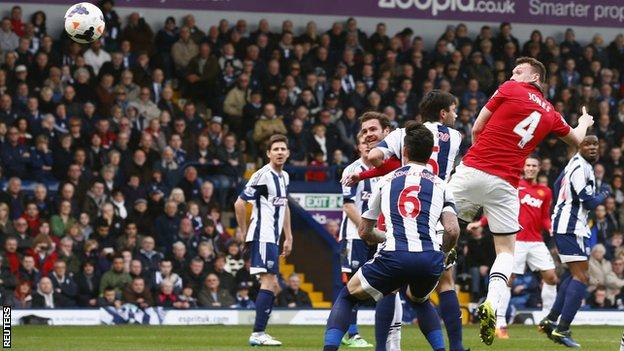 A Rafael header was tipped onto the crossbar before United took the lead when Phil Jones powered in a header.

The Baggies exerted some pressure in search of an equaliser and striker Victor Anichebe angled a shot wide.

However, United secured the win when Wayne Rooney headed in from close range and Danny Welbeck provided a cool finish after a well-worked move.

It was a comfortable victory for the visitors as they restored some pride after the 2-0 Champions League defeat by Olympiakos in their previous game, and avenged a 2-1 defeat by the Baggies in the reverse fixture in September.

The Red Devils are nine points behind fourth-placed Manchester City, who have two games in hand, and 11 adrift of both Liverpool and Arsenal, who - like United - have played 28 matches.

West Brom, meanwhile, are still searching their first win under Pepe Mel, who after seven matches in charge sees his side only above the relegation zone on goal difference, having won just once in 18 league games.

The Spaniard is coming under increasing pressure, with games against fellow relegation rivals Swansea, Cardiff and Norwich to come in the next month.

But for United counterpart David Moyes, the victory will help ease the burden after he admitted this week he had endured a more "difficult" campaign than he envisaged when he took over from Sir Alex Ferguson.

Ferguson's farewell after more than 26 years in charge came with an action-packed 5-5 draw at The Hawthorns at the end of last season, but this match took a while to spring to life.

"West Brom manager Pepe Mel is still winless. United boss David Moyes will not be feeling the pressure so much. He has praised recent performances while bemoaning results, but this time he got both. West Brom were spirited but United were just better."

The first piece of goalmouth action came when United midfielder Marouane Fellaini's header was nodded towards his own goal by Baggies skipper Chris Brunt, but Youssouf Mulumbu cleared off the goalline.

United soon went close again as Adnan Januzaj crossed to the far post, where the unmarked Rafael's header was tipped onto the crossbar by Ben Foster.

The home side failed to heed the warnings and went behind when Robin van Persie whipped in a pacy free-kick and centre-back Jones powered a header past Foster.

The goal belatedly stirred Albion into producing a greater attacking threat, and Claudio Yacob sent an effort just over from close range, the ball flying off his shoulder.

Anichebe then held off Jones before turning and angling a shot wide as the home side went close again.

Both sides then felt decisions went against them. First Foster came out of his area to make a clearance only to miss the ball, which bounced up and struck his hand.

Referee Jon Moss took no action, and also kept his card in his pocket when the home side felt Van Persie should have been booked for a second time for a challenge on Steven Reid.

And Albion were punished for those earlier missed chances when Rafael crossed for Rooney to head in at the far post.

Welbeck put the finishing touch to the victory when, after Fellaini and Rooney combined to tee him up, he controlled expertly before slotting past the advancing Foster.

"Manchester United is a big club and a strong team but today, for us, it is about luck.

"We had three players come off injured and Van Persie not getting a second yellow is very important in the match. It is a yellow, but the referee is the boss."

Asked about his future: "It doesn't depend on me. The only thing I am thinking about is working tomorrow and putting all my energy into making sure West Brom win at Swansea.

"The next four matches are very important for us. We need 11 men, 11 good professional players and a good mentality."

"It was more like it. We were more creative and played well. It's never the easiest of places to come and we had lost to them earlier in the season so it was good to get a good result.

"We earned the right to be in front. When we did, we sort of controlled chunks of the game.

"I think the [Van Persie] tackle is a foul but not a second booking. If it is, we are all going soft.

"All areas pleased me today. There were some very good performances. Marouane Fellaini did really well, Phil Jones and Chris Smalling were excellent.

"I thought the two boys up front were fabulous, with Juan [Mata] and Adnan [Januzaj]."