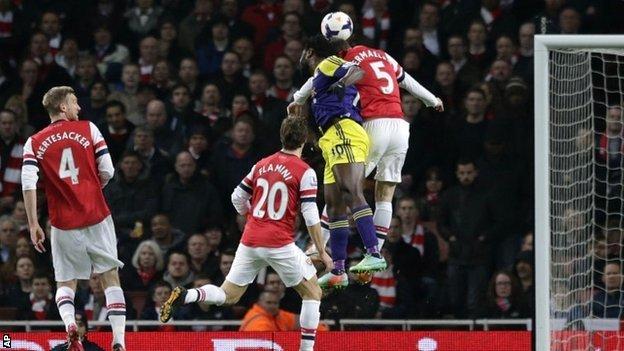 After their mauling at Chelsea on Saturday, the hosts started poorly and went behind to Wilfried Bony's header.

But two goals in 66 seconds changed the mood as Lukas Podolski poked in and Olivier Giroud scored from close range.

The doom returned when the ball ricocheted in off Flamini following Leon Britton's surge into the box.

It was a calamitous way to concede as Per Mertesacker intercepted the ball but it bounced off goalkeeper Wojciech Szczesny before hitting the French midfielder.

Swansea came away with a point but they were left angry at the end when they were denied a chance to win the game as referee Lee Probert blew up with Jonathan De Guzman bearing down on goal.

Once that frustration had subsided, Garry Monk's team will look back on a well-earned draw as they increased the gap to the relegation zone to five points.

Wenger, on the other hand, will wonder what forces are conspiring against him after his side threw away the chance to recover from their nightmare at Stamford Bridge, when they lost 6-0 on his 1,000th game in charge.

Not even the introduction of debutant midfielder Kim Kallstrom - who finally made his debut after signing while injured in January - could help them hang on.

After the trouncing, questions were understandably raised about Arsenal's title credentials but had they hung on to their lead at Emirates Stadium, they would have been four points behind Jose Mourinho's Premier League leaders.

Instead, they trail Chelsea by six and their Champions League qualification now looks under threat as Everton's win at Newcastle means the Toffees are six points in arrears with a game in hand.

Wenger's side must hope that they do not suffer similarly when they host Manchester City on Saturday, with Manuel Pellegrini's side earning a confidence-boosting win at Old Trafford.

Ironically, Flamini was included in the side to offer more midfield assurance after the woeful display in west London.

But after Alex Oxlade-Chamberlain had tested Michel Vorm, the Gunners went behind.

Visiting left-back Neil Taylor was allowed time and space to advance deep into the Arsenal half and he picked out Bony, who still had work to do as he planted his firm header past Szczesny for his 20th goal of the season.

Monk's team could have doubled their lead had Michu, making his first start since 15 December, not opted for the wrong pass after a swift counter attack.

Arsenal did offer their fans some hope, but although they took control in midfield, Swansea were ably led at the back by Ashley Williams although Bony and Jonjo Shelvey were guilty of kicks on Tomas Rosicky and Santi Cazorla respectively.

The Gunners were greeted by a smattering of boos at half-time and frustration grew inside the Emirates as the hosts tried to be too intricate on the edge of the Swansea box.

The relief that met Podolski's goal, as the German volleyed in from Gibbs's cross, soon to turned to joy. Within two minutes, Podolski advanced down the left and crossed for the on-rushing Giroud.

But then just as the Gunners thought they might get some closure, their latest misfortune struck.