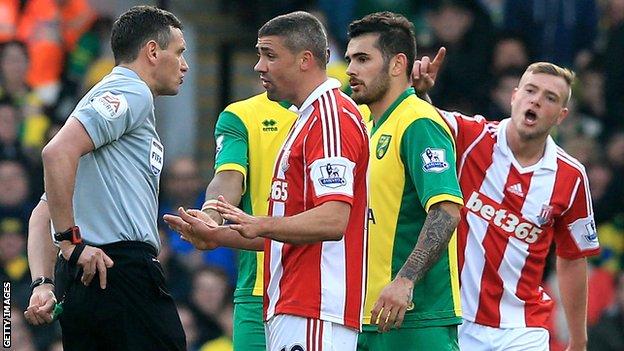 Jonathan Walters scored a penalty and was then sent off as Stoke fought back to draw against Norwich at Carrow Road.

Bradley Johnson headed in Robert Snodgrass's free-kick to put the Canaries ahead in the second half.

Walters, who scored from the spot to beat Arsenal last weekend, converted another penalty after Sebastien Bassong's clumsy foul on John Guidetti.

But Walters was dismissed for a high challenge on Alexander Tettey, although the hosts could not score a winner.

Consequently, Norwich will see the result as two points dropped, particularly as they led, and were playing against only 10 men for the last 12 minutes, against a resolute Stoke side.

The draw also keeps the pressure on manager Chris Hughton, who last month was warned that the club's league position needed to improve.

However, Norwich are now 15th in the Premier League and are only four points above the bottom three.

They face a critical spell as their play fellow strugglers Sunderland, Swansea, West Brom and Fulham in four of their next five matches, before ending the season with games against Liverpool, Manchester United, Chelsea and Arsenal.

Who's afraid of the Wolf?

Stoke remain without an away league win since 31 August, but the point takes them up to 12th, two points ahead of Norwich.

The visitors had the better of a poor first half with Peter Crouch and Walters having shots saved by John Ruddy before Marko Arnautovic fired over.

But Mark Hughes's side failed to build on a bright start as Norwich came back into the match, with Snodgrass having a powerful effort parried by Asmir Begovic.

Lone striker Ricky van Wolfswinkel lacked service - his best moment coming when he glanced a Snodgrass corner narrowly wide - but he has now not scored since the opening day of the season, a run of 20 games in all competitions.

Regardless, his side went ahead 10 minutes into the second half when Snodgrass's delivery was met by Johnson, who scored his third of the campaign.

However a rash challenge in the penalty area by Norwich captain Bassong on substitute Guidetti gave Stoke a way back into the match. Walters took that chance, converting the spot kick.

The Republic of Ireland international's day ended early, though, as he was sent off for the first time in his career. He caught Tettey with a knee-high challenge and was shown a straight red card by Andre Marriner.

Guidetti, who had only been on the pitch for 17 minutes, was withdrawn as Stoke aimed to hang on for the draw.

Johnson missed a chance to score the winner for Norwich in injury time when he dragged a left-footed shot wide from 25 yards as Hughes's side earned a hard-fought point.

"For us, it's two points lost. They caused us some problems in the first half; they have a direct style and are a big, physical side.

"But, having taken the lead, it was our most comfortable part of the game and we dealt with their threats. We kicked ourselves in the foot and gave them a way back into the match with the penalty."

On the spot-kick given for Sebastien Bassong's foul on Jonathan Walters, Hughton added: "It was a very soft penalty where some would be given and some wouldn't be, but we shouldn't have allowed ourselves to be in that position."

"Given the circumstances and going down to 10 men, we will take the point, and it's a big point for us. In the first half, we had the better chances and more of them, but they came out brightly in the second half."

On Jonathan Walters's sending off, Hughes added: "It was an unfair challenge but both players had their feet high, but Jon has caught him. I don't think the punishment fits the crime. He is going to miss three games, but it was a bouncing ball and he has caught him and got sent off.

"We had to dig in and make sure we didn't lose the game and I thought we were excellent in making sure we got something. We have that character and determination and it has helped us get a really important point."