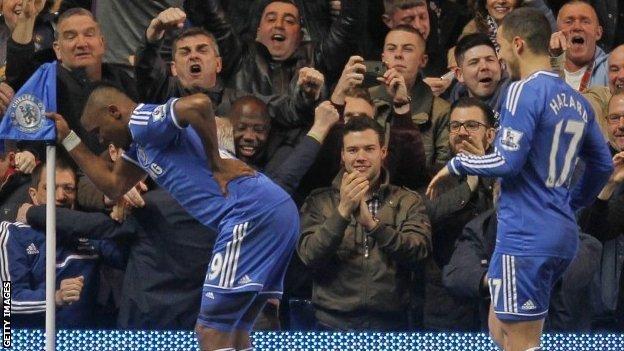 Chelsea moved seven points clear at the top of the Premier League after sinking Tottenham with four second-half goals.

There was little in the game until Jan Vertonghen's error let Samuel Eto'o in to fire the Blues ahead.

Demba Ba made it 3-0 late on following a slip by Sandro, then completed the scoring when he latched on to Kyle Walker's disastrous back-header.

Chelsea's rivals in the title race all have games in hand, but Manchester City will have to win all three of theirs to replace the Blues at the summit.

What could turn out to be a crucial victory for Jose Mourinho's men had an unlikely beginning when Fernando Torres was injured in the warm-up.

Eto'o came into the team instead but he also needed lengthy treatment after just 30 seconds when he was sent tumbling by Spurs keeper Hugo Lloris.

Samuel Eto'o produced a novel goal celebration, but where does it rank in the list of all-time great routines - have there been better ones?

The offside flag was already up, but TV replays showed the Cameroon striker was onside when he ran on to Hazard's pass.

It did not take long for Chelsea to tear through Tottenham again, but Hazard skewed his shot wide from a tight angle after rounding Lloris and it was a long time before his side next threatened.

Spurs were focused on their defensive duties but they did manage the only shot on target of the first half when Sandro tested Petr Cech with a fizzing first-time drive.

At the start of the second half, Chelsea looked short of ideas but a disjointed display from the league leaders was completely turned on its head after 56 minutes when Vertonghen slipped and inadvertently played in Eto'o as he tried to recover.

The Cameroon striker, who turns 33 on Monday, mocked his manager's recent jibes about his age with his celebrations by the corner flag.

Things quickly got worse for Spurs when referee Michael Oliver ruled that Kaboul had shoved over Eto'o in the box as the pair raced to meet Hazard's cross.

The decision looked harsh on the Spurs defender, whose misery was compounded when Oliver showed him a red card to go with the penalty, which Hazard coolly converted.

There was no way back for Tottenham's 10 men from there. Hazard and Oscar both wasted good chances to extend the home side's lead before further gifts gave substitute Ba his late brace.

First, Sandro stumbled as he tried to clear Oscar's cross from the right, allowing Ba in to beat Lloris.

Then, Walker inexplicably tried to head a Lloris clearance back to his keeper, instead setting up Ba to complete the rout.

The defeat leaves Tottenham still four points adrift of the top four, but they have played more games than the three teams immediately above them and their hopes of a Champions League place now appear remote.