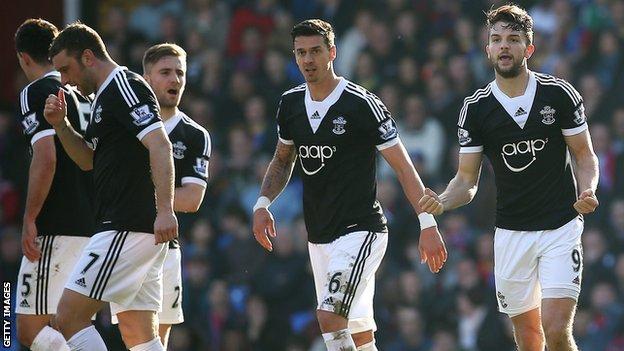 Jay Rodriguez has played 29 times in the league this season, scored 11 goals and created three

Rickie Lambert also struck the post for Saints as Palace failed to create a clear opening with their direct style.

Yannick Bolasie drew a save from Artur Boruc, as the Eagles ended the day only two points above the bottom three.

Tony Pulis's side had taken 10 points from 18 before Saturday to bolster their survival hopes but home defeat, coupled with Cardiff's win over Fulham, means they are far from safe.

The Eagles have never survived a season in the Premier League and, on 27 points, are 10 adrift of the tally that was enough to stay up last year, with 10 games remaining.

Without the injured Marouane Chamakh, Palace frequently aimed long balls at Glen Murray but the tactic drew a blank, and they are now the top flight's lowest scorers with 19 goals.

Southampton centre-backs Dejan Lovren and Jose Fonte coped consistently with the hosts' long balls and throw-ins - though the former might have been fortunate not to be sent off for a foul when he looked to be the last man.

It was actually during Palace's best spell of pressure in the first half that Southampton got the decisive goal, Rodriguez pouncing for his 11th league strike of the season.

Puncheon's poorly judged header saw Rodriguez race clear and, after a sliding challenge on Speroni, he rolled the ball home.

The goal sparked life into the contest and Lambert controlled a poor headed clearance from the impressive Adam Lallana's cross to volley against the post with Speroni beaten.

No goals at the Palace

Palace, with 19 goals, are now the lowest scorers in the Premier League this season and both of their last two goals have been penalties

Three years ago this weekend, Lallana and Lambert were playing against Yeovil in League One, but the England pair were at the heart of their side's good work as Southampton consolidated ninth place in the table.

A Bolasie strike from 18 yards on the stroke of half-time, saved by Boruc with his legs, was the closest the London side came in the first period.

And it was Bolasie again, powerful and busy throughout, who was at the heart of the game's most controversial moment when Lovren, who appeared to be the last man, upended him 20 yards from goal.

The Croatia international received only a yellow card from referee Howard Webb, who was a central figure in the second half as a series of fouls made for a disjointed contest.

But, flanked by full-backs Luke Shaw and Nathaniel Clyne, Lovren and Fonte dealt well with the physical presence of Murray - and the introduction of substitutes Thomas Ince and Cameron Jerome - as Palace failed to score at home for the sixth time this season.

Chelsea, Manchester City and Liverpool are all yet to visit Selhurst Park, and Palace travel to 18th-placed Sunderland next Saturday knowing they will need to find goals from somewhere if they are to stay clear of trouble.

Check out all the best photos from today's Premier League action on the BBC Sport Facebook page.