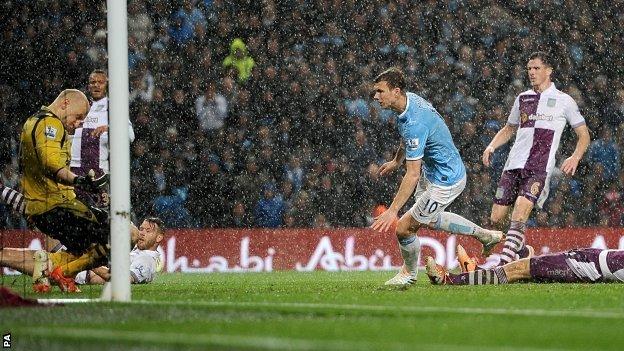 Manchester City took a giant stride towards their second Premier League title in three years as a second-half rout of Aston Villa moved them top of the table with one game left to play.

City had spent only 11 days at the summit all season, but now lead Liverpool by two points with a far superior goal difference heading into Sunday's final round of matches.

They effectively need a point at home to West Ham, while Liverpool will host Newcastle knowing their hopes of a first championship in 24 years are looking unlikely.

Match of the Day analysis

"Yaya Toure is relentless and a machine. He did not have one of his better games but what he did, he did very well.

"His fourth goal was like watching a 15-year-old against under-12s. You just can't catch him. He is only the second midfielder to score 20 goals or more after Frank Lampard in the Premier League."

City could not breach Villa's stubborn defence for more than an hour, but two goals from Edin Dzeko and one from Stevan Jovetic secured the victory before Yaya Toure rounded off the scoring with a spectacular run and finish for his side's 100th league goal of a remarkable campaign.

Exactly three weeks on from the draw against Sunderland that derailed City's title bid and deflated their fans, the atmosphere and belief around Etihad Stadium was transformed.

Liverpool's defeat by Chelsea and draw at Crystal Palace on Monday handed Manuel Pellegrini's side the initiative and following a low key start - not helped by torrential rain and a sparsely populated stadium caused by heavy traffic outside - they piled forward for an opening goal.

Aleksandar Kolarov and Toure were denied by Brad Guzan before David Silva failed to connect with a cross from close range as Villa at times deployed all 11 men behind the ball.

City were missing the cutting edge of Sergio Aguero, sidelined by a groin injury, and the visitors repelled waves of pressure before using their pace to occasionally threaten on the counter-attack.

Lone-striker Jordan Bowery wasted a fine chance when he volleyed wide from Ryan Bertrand's cross and an effort by Andreas Weimann, one-on-one with Pablo Zabaleta, was deflected wide.

City and Pellegrini looked calm, but there was anxiety in the stands after a Silva shot was blocked and Samir Nasri volleyed wide when it seemed certain he would convert James Milner's cross.

The second half started much as the first ended and the frustration around the ground - a result of City's profligacy and perceived time-wasting from Villa - continued to grow as the rain returned.

But Pellegrini signalled his intent by replacing a midfielder with a forward - Jovetic coming on for Milner - and the move paid off spectacularly as Villa failed to cope with City's re-jigged formation.

Jovetic took a position alongside Dzeko up front and that sucked Villa back and in, allowing Silva space to find Zabaleta racing up from right-back. The Argentine crossed low for Dzeko to convert.

City's wild celebrations showed how crucial that strike could prove and their relief soon turned into pure joy when a carbon copy move between Silva and Zabaleta led to a Nasri shot being saved and Dzeko tapping in the rebound.

There was a scare when Weimann headed against the crossbar, but Jovetic curled home to wrap up the points and Toure applied the final flourish by running from his own half, outpacing several defenders and slotting emphatically past Guzan to put City within touching distance of trophy.

Aston Villa manager Paul Lambert: "I thought we did fantastic. I am really proud of the team and the nerves were starting to set in.

"I didn't think it was easy for them, I couldn't be prouder of my own team.

"They are in the driving seat but you never know on the last day of the season."