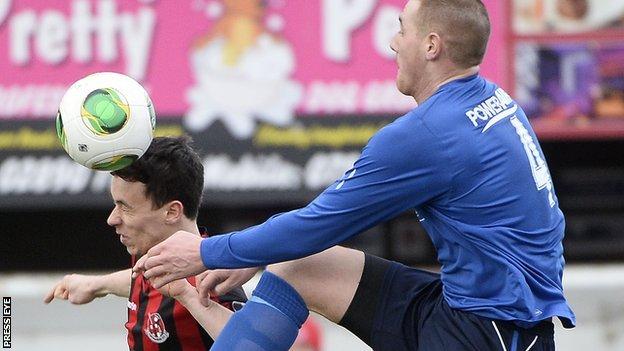 Crusaders defeated 10-man Ballyclare Comrades to seal their place in the last four of the Irish Cup.

Nathan Hanley scored his first goal for the Crues with a 15th-minute penalty and Comrades skipper Andrew Doyle was sent-off for a second yellow after 37.

Matthew Snoddy tucked away the second on 55 and Declan Caddell got a slight touch for the third on 76 minutes.

David McAllister steered home a fourth in the 87th minute and Gary McCutcheon grabbed the fifth in added time.

Early in the game, visiting goalkeeper Paddy Flood produced a fingertip save from a Paul Heatley overhead kick, while at the other end, Daniel Smith tested Sean O'Neill.

Hanley then broke the deadlock from the spot after central defender Andrew Doyle handled while under pressure from Josh Robinson.

Doyle was then dismissed after a rash foul on Davy Magowan.

The Comrades had a penalty appeal of their own turned down when Smith was challenged by Paul Leeman.

Snoddy gave his side some breathing space when his initial shot was blocked by Flood, but he fired home at the second attempt.

Clarke set up Caddell for the third, then Owens headed against the post.

David McAllister clinically steered home a McCutcheon pass three minutes from time, and then McAllister returned the favour a minute into injury-time, providing the cross for McCutcheon to turn the ball in.